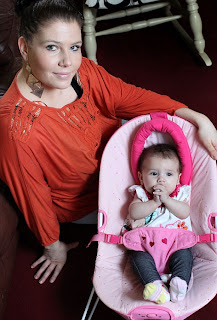 There is an inspiring story in the Daily Mail this morning about a 21 year old mother who beat cancer after refusing to sacrifice her unborn child.

Daniella Jackson was diagnosed with a tumour in her left lung shortly before discovering she was pregnant and refused doctors' advice to abort her child so they could operate on her.

After a difficult pregnancy she gave birth to healthy girl and then had an operation to remove the tumour along with half her lung. According to the Metro report, the tumour was a carcinoid, a slow-growing tumour with a good outcome relative to other lung tumours.

A year on, she is the proud mother of Rennae – her second child – and has been told that she is free of disease.

Usually when the mother's life is at risk from an ongoing pregnancy, the baby is at a viable age and so can be saved simply by bringing forward the time of delivery. However on very rare occasions doctors may say it is necessary to terminate an early mid-trimester pregnancy (13-22 weeks) in an emergency in order to save the life of the mother.

But it is so rare that many obstetricians will not see a case personally in a lifetime of practice.

Even Alan Guttmacher, former President of the pro-abortion US Planned Parenthood Federation said as long ago as 1967:

'Today it is possible for almost any patient to be brought through pregnancy alive, unless she suffers from a fatal illness such as cancer or leukemia, and if so, abortion would be unlikely to prolong, much less save life'.

In fact, women with cancer will often forgo chemotherapy, and in this case surgery, for the sake of the baby.

Daniella did not know whether she would survive from her illness, but such was her love for her baby that she was willing to take the risk and if necessary lay down her life for her. Now she has the joy of caring for and treasuring her daughter and seeing her grow up. One day maybe, at the other end of life, it will be Rennae caring for Daniella.

I wish Daniella and Rennae all the best in their life together and pray that the strong faith in God and self-giving love that has led both to Rennae’s birth and Daniella’s survival will continue to grow.

Reading their story has encouraged me and I hope that by sharing it this testimony will be equally an encouragement to others to rejoice at how precious human life is and to thank God for his faithfulness and self-giving love in sending Jesus to lay down his life for us because he couldn't let us go.

You see, at just the right time, when we were still powerless, Christ died for the ungodly. Very rarely will anyone die for a righteous person, though for a good person someone might possibly dare to die. But God demonstrates his own love for us in this: While we were still sinners, Christ died for us. (Romans 5:6-8)
Posted by Peter Saunders at 01:16