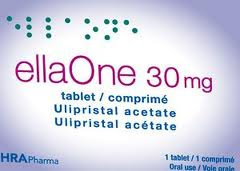 Earlier this week the news broke that a new ‘morning-after pill’ was being sold online in Britain by a London-based company called HealthExpress.

In fact ellaOne (Ulipristal acetate) has been available on prescription in the UK since May 2009. It was granted marketing authorisation by the European Medicines Agency (EMEA) in March 2009 and the FDA in the US approved the drug on 13 August 2010.

According to the UK EllaOne website the drug can actually be bought from at least four UK sources by filling out a simple on-line questionnaire. Prices vary from £21.36 up to £129.99.

This in itself has fuelled controversy as there is no way of knowing whether the personal or health information supplied by anyone buying ellaOne on line is actually true. What would prevent underage girls buying it or, for that matter, a man intending to cover up sexual abuse?

But the specific concern I wish to raise is that retailers are being dishonest about the mechanism of action of the drug.

Hormonal contraceptives prevent pregnancy by one of three mechanisms – by suppressing ovulation (the release of the egg form the ovary), by preventing fertilisation (the union of egg and sperm – usually by interfering with egg and/or sperm transport) and by preventing the implantation of the early embryo in the lining of the womb.

Some women only choose to use those hormonal contraceptives which they know act before rather than after fertilisation. Stopping egg and sperm coming together is one thing. Causing the death of an early embryo is quite another.

How then does Ellaone act? If we rely simply on what the retailers of the drug are saying we might conclude that its action is solely directed at suppressing ovulation and preventing fertilisation.

Typical amongst these is HealthExpress who describe it as follows:

Similarly 121doc claims that ‘ellaOne works by altering the activity of the body’s natural hormone progesterone, which can stop your ovaries from releasing an egg and prevent pregnancy.’

Pharmaplex Direct and Online Clinic give no information about mode of action at all.

However if we look at the scientific literature on the drug it is very clear that ellaOne also acts by preventing the implantation of the early human embryo. In other words it is embryocidal, or abortifacient.

This simple fact is not mentioned by any of the UK retailers but was made powerfully by Donna Harrison, President of the American Association of Pro Life Obstetricians & Gynecologists (AAPLOG) in evidence presented to the FDA’s Advisory Committee for Reproductive Health Drugs in June 2010. AAPLOG’s full submission goes into much more detail.

This embryocidal mode of action accounts for ellOne’s 98% effectiveness in preventing pregnancy even up to 120 hours (5 days) after intercourse and also explains why it is contraindicated in pregnancy – because of the chance that it might cause an early abortion.

Unlike the morning-after pill Levonelle (levonorgestrel), but like the abortion drug mifepristone (RU 486), ellaOne is embryotoxic in animal studies. In practice it is actually very unlikely that ellaOne could be used to cause abortions, since it is used in much lower doses (30 mg) than the roughly equipotent mifepristone (600 mg). But killing early embryos is another matter entirely.

According to Wikipedia the EMEA proposed to avoid any allusion to a possible use as an abortifacient in the package insert in order to stop people misusing the drug.

‘For pregnancy to occur there has to be ovulation (release of eggs) followed by the fertilisation of the egg (fusion with a sperm) and implantation in the womb. The sex hormone progesterone plays a role in the timing of ovulation and in preparing the lining of womb to receive the fertilised egg… Through its actions on the progesterone receptors, ellaOne prevents pregnancies mainly by preventing or delaying ovulation.’

One has to read carefully between the lines to understand that this is actually saying that the drug could act by preventing an embryo implanting.

The Faculty of Sexual and Reproductive Healthcare (FSRH) of the UK’s Royal College of Obstetricians and Gynaecologists (RCOG) also hints at this mode of action.

The NHS is a little less ambiguous:

‘EllaOne stops or delays ovulation and makes it more difficult for a fertilised egg to be implanted into your womb.’

Most honest is ‘Netdoctor’ which simply and clearly states:

‘Ulipristal is also thought to alter the lining of the womb, preventing it from being prepared for a fertilised egg. This means that if an egg is released from the ovaries and is fertilised, it cannot implant into the womb and therefore pregnancy is avoided.’

EllaOne’s significantly higher cost than levonelle means in effect that in practice it will only be used in circumstances where there is a high risk that levonelle will not work – that is 2-5 days after sexual intercourse. At this stage it will almost certainly be acting almost exclusively by killing embryos rather than by preventing fertilisation.

Many women believe that life begins at fertilisation and may think twice if told that a drug worked by killing embryos. But how is properly informed consent even possible if retailers and the EMEA itself will simply not tell the truth about how ellaOne actually works?

We have to accept that EllaOne is already legal and available in the UK. But we can nonetheless insist that retailers are honest about its real mechanism of action.
Posted by Peter Saunders at 17:19