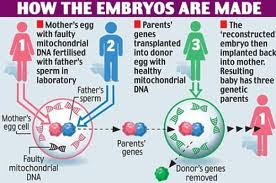 The ‘three-parent IVF’ technique developed at Newcastle University (on which I commented last April) involves creating a fertilized egg in a laboratory, then removing its nucleus and placing it into another embryo from which the nucleus has been removed (see picture above).

The resulting embryo has nuclear DNA from a man and a woman and cytoplasmic DNA from a second woman - so effectively three genetic parents, although the contribution from the second woman is very small.

Although they admit that they are far from ready to use the technique on patients, they feel that because the science is progressing ‘very rapidly’, the review of the process, which would inform political debate, needs to start now.

Getting the regulatory changes necessary to allow using the technique in patients now no longer involves parliament but only approval from the Health minister. The HFEA panel is set to submit its report to the government next month.

But I have three big questions about this new technique:

But we have been here before with human reproductive cloning (the Korean debacle), so-called therapeutic cloning for embryonic stem cell research (which has thus far failed to deliver) and animal hybrids (now a farcical footnote in history)

The UK broadsheets this morning largely transcribe uncritically the spin of the Newcastle unit’s press release – whilst giving scant attention to the questions of safety, efficacy and ethics being raised by commentators in scientific journals and blogs. Some questions that you will not hear asked or answered:

1. What will be the effect on the embryos of the small amount of abnormal cytoplasm containing defective mitochondria that is still being transferred?
2. Will any of these embryos survive beyond blastocyst stage? (cloned human embryos and animal-human hybrids produced by similar ‘nuclear replacement’ technology haven’t)
3. If they do survive will the nucleus from one embryo function properly with the cytoplasm of another?
4. Will the progeny be normal or be suffering from defects that are in fact worse than mitochondrial disease itself? (we know that cloning by nuclear replacement is possible in frogs, difficult in mammals, hugely problematic in non-human primates and currently not possible in humans)
5. What about the hundreds of embryos that have already been destroyed in the research?
6. What will be the psychological effect on any progeny of the fact that their DNA is derived from three separate ‘parents’?
7. What will be the effect of the introduced transmissible DNA on future generations?

We also need to realise that the Newcastle scientists have a huge financial and research-based vested interests that make it very difficult for them to be balanced and objective in the way they present their findings.

Getting the regulatory changes and research grants to continue and extend their work is dependent on them being able to sell their case to funders, the public and decision-makers. And they know that that is best achieved through attention-grabbing media headlines and press releases and heart grabbing (but highly extreme and unusual) human interest stories that are selective about the truth.

So I’m not letting myself be carried away by the hype and spin. And I’m not holding my breath about the promises of therapies.
Posted by Peter Saunders at 14:55