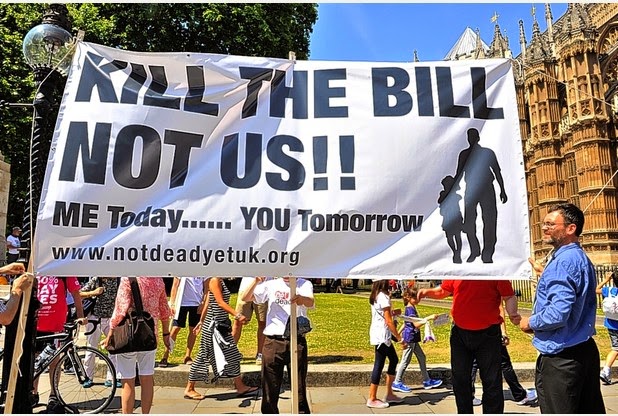 Lord Falconer’s ‘Assisted Dying Bill’ , which reaches its Committee Stage in the House of Lords on Friday 7 November, seeks to legalise assisted suicide (but not euthanasia) for mentally competent adults (>18) with less than six months to live subject to ‘safeguards’ under a two doctors’ signature model similar to the Abortion Act 1967.

The Bill had an unopposed second reading in the House of Lords on 18 July. This is not unusual for the House of Lords and simply means that the Lords were opting to debate it line by line rather than just rejecting it on principle.

A Supreme Court ruling earlier in the year put pressure on the Lords to give the bill a proper hearing and if they didn’t, doubtless Falconer would keep bringing it back, using up more precious parliamentary time and complaining that ‘we have not yet had the debate’.

For opponents to the bill – and there are many – the tactical options were either to kill the bill dead – as they did with a similar bill from Lord Joffe in 2006 – or to strangle it slowly in committee by amending it out of recognition before putting in the boot one last time.

They have opted for the latter, a kinder and more compassionate course of action for a piece of draft legislation which is already terminally ill. And a better plan for kicking it beyond the long grass to a place where no one dare retrieve it.

When the bill was debated in July thousands of people wrote to the Lords to complain about its loopholes and inadequacies and disabled people staged a mass protest outside Westminster Palace.

The depth of feeling against the bill across the political spectrum was underlined when the Guardian newspaper – that bastion of right wing conservative values - changed its editorial policy to oppose it because of real concerns about public safety.

Already a massive fight is brewing for this Friday with peers tabling a sack load of amendments aimed at exposing the bills weaknesses and inconsistencies. More are expected later this week and the government is already talking about extending the committee stage so that they can all be heard.

But in reality this is something of a phoney war.

It is conceivable that the bill may yet come to a final vote in the House of Lords, but both sides are agreed that the chances of it clearing the Commons in the run up to the election are virtually zilch.

The most Falconer’s supporters can hope for is some sort of a ‘moral’ - albeit Pyrrhic - victory by perhaps winning a vote over an amendment or two in a poorly attended committee debate.

The real battle will happen after next May’s general election and the chances of the bill progressing then will depend very much on who is in power. It’s very clear that the current House of Commons would not pass it.

Having said all that it is crucial that those opposed to the bill make their voices heard. Peers have been buried in letters from the pro-euthanasia lobby in the run up to committee as the former Voluntary Euthanasia Society – aka Dignity in Dying – launch their attack.

Now is the time for those opposed to the bill to strike back and urge peers to put down this deficient draft legislation.

We don’t need this bill.

Any change in the law to allow assisted suicide will place pressure on vulnerable people to end their lives for fear of being a financial, emotional or care burden upon others. This will especially affect people who are disabled, elderly, sick or depressed. The right to die can so easily become the duty to die.

The law we have at present does not need changing. The stiff penalties it holds in reserve provide an effective bulwark against exploitation and abuse, but in so doing it still allows judges to act with mercy in hard cases. It also protects vulnerable relatives from being subtly coerced into assisting a suicide against their better judgement.

The pressure people will feel to end their lives if assisted suicide is legalised will be greatly accentuated at this time of economic recession with families and health budgets under pressure. Elder abuse and neglect by families, carers and institutions are real and dangerous and this is why strong laws are necessary. Where there is a will, there is an anxious relative.

Furthermore experience in other jurisdictions, such as Belgium, the Netherlands and the US American states of Oregon and Washington, shows that any change in the law will lead to ‘incremental extension’ and ‘mission creep’ as some doctors will actively extend the categories of those to be included (from mentally competent to incompetent, from terminal to chronic illness, from adults to children, from assisted suicide to euthanasia). This process will be almost impossible to police.

It’s time to put Falconer out of his misery. He has suffered enough. Let’s not draw things out too long.

Come and stand with disabled people this Friday at 9am outside parliament.

And write some letters to peers. You’ll find all the briefing information you need on the Care Not Killing website along with the specifics of the Bill’s specific defects and the broader arguments against a change in the law.