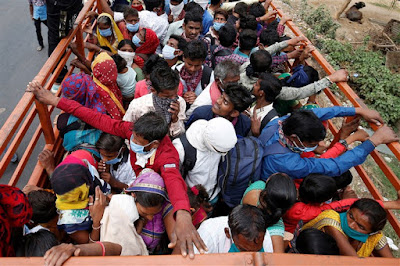 US and Western Europe have so far been the hardest hit by the coronavirus with over 80% of cases worldwide - but there’s good reason to think that the Developing World will ultimately suffer most.

According to a recent report, 40 million lives may be at risk this year (see my previous post here).

Controlling spread of the virus there will be a very different prospect in low-resource settings. What techniques are likely to work best?

A new paper from the London School of Hygiene and Tropical Medicine (LSHTM) is advocating so-called green zoning – rather than quarantining those already infected by the virus (red zoning), those individuals who are both unaffected and vulnerable are protected by being separated off from the rest of the population.

This may appear counterintuitive – after all developing countries have a much lower proportion of older people – in Wales, for example 21% are over 65 whereas in Ethiopia only 3% are.

But the authors identify three reasons why populations in the developing world are likely to be more vulnerable to COVID-19.

First is reduced social distance. Larger intergenerational households, intense social mixing between the young and elderly, overcrowding in urban slums and displaced people’s camps, and specific cultural and faith practices such as mass prayer gatherings, large weddings and funerals – all lead to higher transmissibility of the virus.

Second is high numbers of vulnerable patients. Non-communicable diseases (NCDs), like diabetes, hypertension and chronic respiratory disease, undernutrition, tuberculosis and HIV all make it more likely that coronavirus infection will push people over the edge.

The strategies that have worked so effectively in containing the virus in East Asian countries like Singapore, Hong Kong and South Korea – widespread testing and meticulous contact tracing – are very resource-intensive and less easily replicable in low-income and crisis settings.

Lockdowns are also likely to be very harmful for societies in which most live from hand to mouth and have little if any savings. And when people are stretched beyond their ability to cope they are less likely to comply with control measures.

There is also little prospect of scaling up intensive care to the levels required and isolation of cases in dedicated high-intensity wards might offer little benefit as most transmission would still be due to mildly unwell people spreading the virus to close contacts and family members.

For all these reasons, it may be therefore a better use of resources to focus on protecting the vulnerable.

In Ebola epidemics, the aim of isolating the ill into a contaminated ‘red zone’ is primarily to protect the healthy. But with COVID-19, the red zone is everywhere, so it makes more sense to protect those more likely to suffer fatal illness from the rest of the population who are much more likely to survive the infection.

The risk of coronavirus infection increases with age with a particularly high risk among those aged over 70 (or even 60 in low-resource settings) and/or living with NCDs and other immuno-suppressing conditions.

The authors suggest three options for shielding high-risk community members – house-hold level, street-level and neighbourhood or sector level. In the first two arrangements healthier members of the high-risk group could care for those with disabilities.

Stringent infection control measures should operate with all options. The green zone’s boundaries should probably remain virtual, but a single physical entry point, with handwashing facilities, should be established and food and other provisions should only be exchanged through this point.

Given that it may be difficult to isolate at-risk people for long periods the strategy should be discontinued as soon as safe to do so. This could be ascertained by serological testing, which is likely to be very cheap once widely available.

In the meantime, those who develop symptoms of COVID-19 (fever, continuous cough) would be tested (if possible), isolated and quarantined for 14 days in the usual way (red-zoned), along with their close contacts (family members).

This approach would enable the rest of the community to carry on with normal life with frequent handwashing etc (maybe we could call this the blue zone!), knowing that if they did catch the virus they would be very unlikely to suffer serious symptoms or die. Meanwhile, immunity would build up gradually in the general population.

This simultaneous green zone/red zone approach also has the advantage of avoiding the negative effects of lockdown on the economy and normal life, whilst protecting those most vulnerable, until a time when a vaccine is available to confer longer-lasting protection.

Longer-term, as with other viral illnesses like influenza or HIV, it will be vaccines or antiviral therapies that will best protect people in low-resource settings – but in the meantime, in the absence of these, protection in green zones seems a sensible, practical and low-cost option for reducing mortality.

The protection of the vulnerable resonates well with Christian ethics – and green zones operate on the ‘Passover principle’ where those located in safe places (marked by blood on the lintel) were kept from harm. With Easter coming up soon – this may be a good way to motivate faith leaders, who are often the most trusted voices in developing world communities, to protect their flocks.