In sacking Dr Raabe, the Home Office has demonstrated intolerance, cowardice, ignorance and an unwillingness to investigate complaints properly. 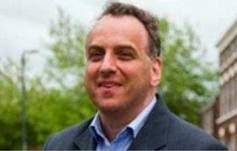 A Christian GP has been sacked as a government drugs adviser after it emerged he wrote a study linking homosexuality to paedophilia.

Dr Hans-Christian Raabe, of Manchester, was appointed to the Advisory Council on the Misuse of Drugs (ACMD) less than a month ago.

The Home Office confirmed that Dr Raabe (pictured), who was appointed to the ACMD by James Brokenshire, drugs minister, had been dismissed and would not continue with the unpaid, three-year post. Recruitment for a new adviser will apparently begin shortly.

Sources said he had been sacked after not ‘disclosing’ a paper he had written, which had linked homosexuality to child sex offences, during interviews for the role.

When journalist Melanie Philips wrote in his defence she was allegedly subjected to death threats.

Hans-Christian Raabe has said his dismissal came as a result of his views ‘completely unrelated to drug policy’ and has added: ‘I have been discriminated against because of my opinions and beliefs, which are in keeping with the teaching of the major churches.’

Others, however, have claimed that he was dismissed not for his religious views but for making claims that are at odds with the scientific evidence.

Bridget Phillipson, a Labour member of the Commons Home Affairs Select Committee, said it was an ‘absolute outrage’ the government had appointed ‘someone with such horrific opinions to this senior role’.

It seems that the specific comments for which Dr Raabe is being criticized appeared in a paper titled ‘Gay Marriage And Homosexuality: Some Medical Comments’ which he co-authored in February 2005.

It contains the statement: ‘Any attempts to legalise gay marriage should be aware of the link between homosexuality and paedophilia. While the majority of homosexuals are not involved in paedophilia, it is of grave concern that there is a disproportionately greater number of homosexuals among paedophiles and an overlap between the gay movement and the movement to make paedophilia acceptable.’

What I find particularly bizarre about this whole incident is that people with apparently no knowledge at all of the subject under debate, let alone expert knowledge, feel qualified to express strong opinions about Dr Raabe’s character and scientific expertise.

I do not pretend to be an expert in this area myself - far from it - but a brief search of the medical literature will confirm that there certainly have been papers published in peer-reviewed scientific journals which report an association between homosexuality and paedophilia and which also consider that this is an issue worthy of investigation and not off-limits to scientific enquiry.

The papers Dr Raabe quotes were written by Freund, who, though careful to point out that his first study should not be interpreted as indicating that gay men are more likely to be paedophiles, none the less concludes: 'homosexual development notably does not result in androphilia but in homosexual paedophilia' (1) Freund's data in a second paper also show that a) around 80% of the victims of paedophilia are boys molested by adult males and b) although most gay men are not paedophiles, 35% of paedophiles are homosexual whilst only 2% of adult men overall are homosexual.(2,3)

Even more interesting is a study by Bradford et al. Rather ironically an official Home Office document published in 1998 (5) quotes this (2nd para, p14) approvingly as follows: 'Bradford et al. (1988) suggested reasonably that approximately 20 to 33% of child sexual abuse is homosexual in nature and about 10% mixed.'

So let's get this right. The Home Office has sacked Dr Raabe for saying what a Home Office document says.

Given that official figures released last year showed only one per cent of the population is homosexual, it is not surprising that supporters of Dr Raabe say same-sex child abuse is significantly over-represented.

So was Dr Raabe sacked for disclosing an inconvenient truth that was totally irrelevant to his appointment? The answer appears to be yes. His concerns were not directed at the majority of the homosexual population but a small, highly dangerous and criminal portion of them.

I have not read any of these studies, and am therefore not in a position to comment on their scientific rigour. I simply want to make the point that such studies most certainly do exist.

These findings are as one might expect disputed by other authors – and the matter is understandably a contentious one – but I notice that a major review on the subject of paedophilia published in 2007 and available on line, which reviews all 554 papers published on Medline on pedophilia, also acknowledges that the jury is still out on the matter:’ The main evidence in favor of a relationship between pedophilia and homosexuality is the common cause of fraternal birth order and postnatal learning… It seems to be questionable logic to view these two conditions as completely unrelated.’(6)

That Dr Raabe should be sacked from his role as a drugs advisor on the basis of his expressed opinions on an entirely unrelated issue (homosexuality) is itself at very least unfair. But the fact that the data he quoted were actually derived from peer-reviewed scientific journal articles (including one quoted approvingly by the Home Office itself!), and on a matter where experts agree that there is a diversity of learned opinion, makes his dismissal both outrageous and inexcusable.

In bowing to political pressure on this matter the Home Office has demonstrated intolerance, ignorance, cowardice and an unwillingness to investigate complaints properly.