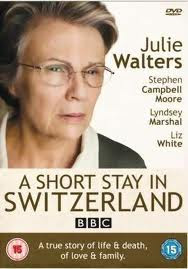 Last Friday I was quoted on the front page of the Daily Mail as saying that the BBC was acting as ‘cheerleader’ in the campaign to legalise assisted suicide.

This article amplifies those comments and gives some of the wider background.

The BBC have recently filmed a man killing himself at the notorious Dignitas suicide facility for a controversial ‘documentary’ to be fronted by celebrity author Terry Pratchett, a prominent supporter of euthanasia.

The programme, entitled ‘Choosing To Die’, due to be screened this summer, follows a 71 year old man (known only as Peter) in the late stages of motor neurone disease as he travels from Britain to the Swiss centre to end his life in the fantasy novelist’s company.

Screening the moment of a suicide victim’s death will be a first for the BBC although a Sky Real Lives programme first crossed the rubicon in doing so back in 2008.

My full newspaper statement was as follows:

‘The BBC is acting like a cheerleader for legalising assisted suicide. It is regrettable that a man’s death will be shown on screen but we are also concerned that this documentary will not be balanced. Given Sir Terry Pratchett’s position, the fear is that it will show all the supposed benefits of assisted death with very little redress.’

Terry Pratchett is already well known as a campaigner for the legalisation of assisted suicide, and provided funding for Lord Falconer’s discredited Commission on Assisted Dying.

Whilst being a patron of Dignity in Dying (formerly the Voluntary Euthanasia Society), he has, like Michael Irwin and Philip Nitschke, much broader aims than those claimed by DID, who passionately protest (methinks too much) that they want a change in the law only for ‘terminally ill, mentally competent adults’

According to the BBC website, Pratchett has a larger agenda. He believes that ‘everybody possessed of a debilitating and incurable disease should be allowed to pick the hour of their death’. He is quoted in Australia as supporting it for the broader category of ‘seriously ill people’.

The DID website reports his aims as even more far-reaching: ‘I believe passionately that any individual should have the right to choose, as far as it is possible, the time and the conditions of their death.’

This programme will be the fifth produced by the BBC in just three years, presented by a pro-euthanasia campaigner or sympathiser, which has been specifically designed to portray taking one’s own life in a positive light.

‘I'll Die When I Choose’ (8 December 2008) was a BBC Panorama documentary fronted by Margo Macdonald MSP in the lead up to tabling her ‘End of Life Assistance (Scotland) Bill’ in the Scottish Parliament. The programme screened a total of four times between 8 and 14 December 2008. The bill also received massive coverage by the BBC but was overwhelmingly defeated by 85 to 16 in November 2010.

‘A Short Stay in Switzerland’ (January 2009) was a 90 minute docudrama starring Julie Walters (and written by award-winning writer Frank McGuinness) which told the story of the death of Bath GP Anne Turner at the Dignitas facility in January 2006. It screened seven times between 25 January 2009 and 27 January 2010. BBC health correspondent Fergus Walsh, who accompanied Dr Turner on her final journey, actually played himself in the film.

The 34th Richard Dimbleby Lecture, ‘Shaking hands with death’ (1 February 2010) also featured Terry Pratchett making the case for assisted suicide for patients, like himself, with Alzheimer’s disease. A hand-picked audience in the Royal College of Physicians in London signalled their approval as he described himself ending his life, by nonchalantly sipping poisoned champagne, in his back garden.

BBC East Midlands ‘Inside Out Programme’ (15 February 2010) featured a confession by producer Ray Gosling to smothering a gay lover with AIDS some years before. The story, after an exhaustive police investigation, turned out to be pure fantasy, but not until after the BBC machinery had blown it up into a massive international news story just prior to the Director of Public Prosecutions reporting on his assisted suicide prosecution criteria.

I am also aware of a sixth ‘documentary’ currently being put together, again presented by a keen advocate of legalising assisted suicide, news of which has not yet entered the public domain.

During this three year period there has not been one BBC programme presenting the opposite point of view. This is in spite of the fact that all three parliamentary bills attempting to legalise the practice in the last five years have been heavily defeated and despite the continuing robust opposition to legalisation from disability rights groups, medical professionals and faith groups.

And yet not one representative of any of these groups has been given the opportunity to put their views as prime presenter of a BBC documentary. Other than in news bulletins no specialist in palliative medicine has had access to a BBC documentary to explain the benefits of good care, no disabled person has been able to convey their anxieties about a change in the law and no faith leader has been permitted to present an alternative perspective on suffering and dying.

Specifically, no opponent of legalisation has been given the opportunity by our national (taxpayer funded) broadcaster to put to the British public, in a documentary, the arguments that have three times persuaded parliament about the dangers to vulnerable people of a change in the law.

By contrast, many proponents of assisted suicide, who have expressed a strong persistent wish to be ‘helped to die’ by their own hands, have been granted an international platform by our national broadcaster, to tell their stories in lurid detail and without cross-examination, creating the false impression that the small minority they constitute are somehow representative of all people facing suffering or death.

Each from Reginald Crew to Tony Nicklinson has his or her case highlighted in painstaking detail by the BBC usually featuring long personal interviews and often with substantial extraneous information about their lives emotively conveyed. Contrary views are either not expressed, or are at best relegated to single sentence reactionary soundbites:

Readers will recognise many of the personalities involved as household names: Anne Turner, John Close, Debbie Purdy, Raymond Cutkelvin, Diane Pretty, Daniel James, Sir Edward and Lady Downes, Nan Maitland, and so it goes on and on and on.

In each case, the power of the personal narrative is presented skillfully to shape public opinion, courtesy of the BBC with all of its publicly funded resources being brought to bear.

What is somewhat ironic about this whole process is the fact that there are strict codes about media coverage of suicide, not only from bodies like the World Health Organisation, but also from the BBC itself (on covering both suicide and also criminal acts), which are constantly and repeatedly flouted.

The BBC it seems is going full speed in the opposite direction.

By contrast the WHO advice about appropriate media practice is largely ignored by the BBC:

‘Refer to suicide as a completed suicide, not a successful one. Present only relevant data, on the inside pages. Highlight alternatives to suicide. Provide information on help lines and community resources. Publicize risk indicators and warning signs.’

Concerns about the well-documented phenomenon of suicide contagion, especially following suicides carried out by celebrities (more on this later), and the effects of suicide on other individuals and society at large, are simply not part of the narrative when the BBC covers these issues. Instead it has adopted almost a campaigning stance.

No one is denying that the debate about assisted suicide is crucially important. This is a free democratic society and those who wish to see a change in the law are fully entitled to express their views in the public square. Furthermore it is to be expected that private media outlets will want to pursue a specific editorial line.

But with an issue as important as this one, campaigners should not have the added advantage of being able to spread their propaganda by using the publicly funded national broadcasting corporation effectively as a private public relations company and press office.
Posted by Peter Saunders at 16:20