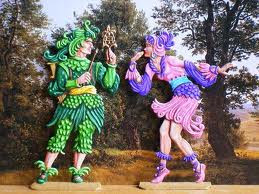 I recently blogged about the new German film ‘Goethe’, a study of the early life of the celebrated German poet of the same name.

It retells the quasi-autobiographical love story ‘The Sorrows of Young Werther’ which made Goethe famous. Werther commits suicide after his lover marries another man. The book, when initially published in 1774, provoked a spate of suicides amongst young people, and thereby gave rise to the medical term ‘Werther Effect’ meaning ‘copycat suicide’ or ‘suicide contagion’.

The ‘Werther Effect’ is the subject of the WHO international guidelines on the portrayal of suicide in the media, ‘Preventing Suicide: A Resource for Media Professionals’.

The guidance sets out the type of media coverage of suicide that is likely to elicit copycat behaviour, most of which has been breached by BBC coverage of assisted suicide.

I was therefore most interested to find a recent paper by Austrian authors in the British Medical Journal and a much longer one by the same group in the British Journal of Psychiatry published only late last year reviewing media coverage of suicide.

The authors note in the first (BMJ) paper, ‘Papageno vs Werther Effect’, that some media coverage of suicide actually leads to a decrease rather than an increase in suicide rates.

In other words, media stories about how people coped positively with suicidal feelings actually lead to a decrease in levels of suicide in the general population.

They name this protective effect ‘the Papageno effect’ in honour of the character in Mozart’s opera the Magic Flute.

‘When Papageno fears that he has lost his love, Papagena, he prepares to kill himself. But three boys save him at the last minute by reminding him of other alternatives to dying.’

It concludes that ‘The impact of suicide reporting may not be restricted to harmful effects; rather, coverage of positive coping in adverse circumstances, as covered in media items about suicidal ideation, may have protective effects.’

They concede that ‘More research is needed to understand the Papageno effect’ but argue that ‘from a public health perspective, even small protective effects could have a noticeable positive impact on internationally ongoing collaborations between health and media professionals’.

So we have a tale of two fictional lost loves. Werther killed himself but Papageno was helped to find new meaning in life. Werther effect bad. Papageno effect good.

Now all we need to do is to persuade the media in Britain, and especially the BBC, to apply these findings.
Posted by Peter Saunders at 13:22