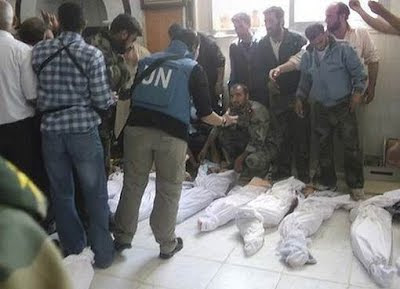 BBC Radio Four led on the Syrian massacre this morning describing it in graphic terms as the ‘deliberate mass killing of children’ who ’were murdered one by one’.

The story was also one of the top three on the BBC website earlier today along with the account of six children dying in a house fire in the north of England.

These would have been the top two reports had it not been for Mitt Romney gaining the Republican nomination for the US presidential elections yesterday.

There are few things more gut-wrenching than the death of children but these two stories have grabbed the media spotlight mainly because of the particular circumstances involved.

It now appears that most of the 49 killed in the village of Taldou were summarily executed, with UN observers claiming that many of them had been killed by close-range gunfire or knife attacks.

And there are now questions being asked about whether the fire that resulted in the deaths of six siblings in Derby may have been started deliberately.

Every child’s death is a tragedy but there are few things more reprehensible than the killing of children by adults. Children are rightly seen as amongst the most vulnerable and defenceless members of society and deserving of special protection.

It is therefore not surprising that Western governments are acting quickly at the highest level to expel Syrian diplomats and impose sanctions and the police are giving high priority to investigating the Derby fire for which the children’s own parents are now suspects.

Whether or it turns out that the Syrian government was directly involved in the latest atrocities, or whether or not the parents are charged with starting the fire, it is nonetheless deeply ingrained in the human psyche that public authorities have a duty to protect the vulnerable and that the strongest advocates for children should be their own parents.

It is for this reason that I find the relatively low prominence given to the 2011 abortion statistics also published yesterday profoundly bizarre.

The BBC report highlights the fact that 34% of the 189,931 women having an abortion last year in England and Wales had had one before and most newspapers note the fact that repeat abortions now make up 36% of the total, over a third.

The Independent further notes that for the first time last year more mothers had abortions than childless women. 51% of women undergoing abortions already had at least one child.

Other press reports give more detailed analysis with most reproducing the figures highlighted by the Press Association.

But as far as I can see no one has yet commented on the fact that 98% of the total are funded by the NHS through tax revenues and also that 98% were carried out on mental health grounds (see section 2.9 of report).

As I have pointed out before, this latter 98% are also technically illegal as there is no evidence that continuing with an unplanned pregnancy poses any greater risk to a mother’s mental health than having an abortion.

And yet doctors continue performing them regardless while government, police and the crown prosecution service stand idly by and the major abortion providers justify it as necessary.

There is no one more vulnerable, more innocent and being killed in greater numbers than the unborn child. Each year around the world there are 42 million abortions, against only 57 million deaths from all other causes except abortion.

And in Britain there have already been over 7 million abortions in the 45 years since the Abortion Act was passed in 1967.

It is understandable that people are shocked and outraged by child deaths in Syria and Derby.

But the fact that we can barely raise an eyebrow at abortion in Britain is a chilling testimony to our astounding spiritual blindness and breath-taking hypocrisy.

189,931 unborn children died in England and Wales last year – under their mothers’ instructions, at the hands of doctors and paid for by tax payers’ money. And parliament, police and prosecution service did nothing.

If the Syrian massacre was the ‘deliberate mass killing of children’ who ’were murdered one by one’ then what was this?
Posted by Peter Saunders at 06:04