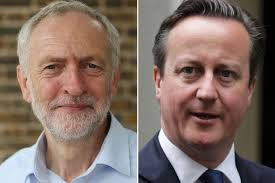 Both Prime Minister David Cameron and Opposition Leader Jeremy Corbyn have issued Christmas messages today, although Corbyn is promising a fuller one for New Year.

You can read them in full in the Daily Mirror (here and here) and I have pasted them below for easy reference.

I was particularly interested in what they said about Jesus Christ and I’ve highlighted this in bold in the text of their messages below.

Each of them uses the refugee crisis and those struggling at home as major themes but in different ways.

David Cameron emphasises the importance of care and security asking us to ‘give thanks to those who are helping the vulnerable at home and protecting our freedoms abroad’.

He specifically praises health professionals for their care for the vulnerable and our armed forces for making sacrifices to protect us.

He hails Jesus Christ as ‘God’s only Son – The Prince of Peace’, says that his birth means ‘peace, mercy, good will and above all hope’ and refers to Britain as ‘a Christian country’.

He asks us to ‘reflect on the fact that it is because of these important religious roots and Christian values that Britain has been such a successful home to people of all faiths and none’.

Jeremy Corbyn praises those who will ‘not be getting a break’ over Christmas – hospital staff, firefighters, the police and the armed forces.

He then talks about refugees, the homeless and those on low wages, emphasising that the Nativity story is about ‘offering shelter to a family in need and to those who find themselves ­refugees - fleeing evil’.

He proceeds to quote two of Jesus’ most well-known teachings: ‘Do to others what you would have them do to you’ (Matthew 7:12) – which he says is ‘the essence of (his) socialism’ and ‘It is more blessed to give than to receive’ (Acts 20:35)

Ironically it describes an ideal which communism was never able to deliver – Communism, by contrast, has always meant inequality, oppression and the strong dominating the weak.

In fact the saying actually goes back far beyond the nineteenth century to the first and finds its origin – like Corbyn’s two quotes from Jesus above -  in the pages of the New Testament.

It describes how Christians in Antioch (in modern day Syria) helped their brothers and sisters in Jerusalem (Israel) during a famine.

‘To each according to his need’ comes from Acts 4:34,35: ‘There was not a needy person among them, for as many as were owners of lands or houses sold them and brought the proceeds of what was sold and laid it at the apostles' feet, and it was distributed to each as any had need.’ (ESV)

It describes how the early Christian believers in Jerusalem provided for each other’s material needs.

Care for the vulnerable and making sacrifices for the weak are at the heart of the Christian ethic – and have their origin in Jesus Christ himself.

As the Apostle Paul tells us Jesus ‘did not count equality with God a thing to be grasped’ but ‘emptied himself’, ‘taking the form of a servant’ and ‘being born in the likeness of men’ (Philippians 2). While we were weak, ‘Christ died for the ungodly’ (Romans 5).

Christmas is when we remember, in Paul’s words to Titus, ‘our great God and Saviour Jesus Christ, who gave himself for us to redeem us from all lawlessness and to purify for himself a people for his own possession who are zealous for good works.’ (Titus 2:13-15)

Let’s live lives and speak words, by his strength, that point to and give glory to Jesus Christ this Christmas and this coming year.

If there is one thing people want at Christmas, it’s the security of having their family around them and a home that is safe.

But not everyone has that. Millions of families are spending this winter in refugee camps or makeshift shelters across Syria and the Middle East, driven from their homes by Daesh and Assad.

Christians from Africa to Asia will go to church on Christmas morning full of joy, but many in fear of persecution. Throughout the United Kingdom, some will spend the festive period ill, homeless or alone.

We must pay tribute to the thousands of doctors, nurses, carers and volunteers who give up their Christmas to help the vulnerable – and to those who are spending this season even further from home.

Right now, our brave armed forces are doing their duty, around the world: in the skies of Iraq and Syria, targeting the terrorists that threaten those countries and our security at home; on the seas of the Mediterranean, saving those who attempt the perilous crossing to Europe; and on the ground, helping to bring stability to countries from Afghanistan to South Sudan.

It is because they face danger that we have peace. And that is what we mark today as we celebrate the birth of God’s only son, Jesus Christ – the Prince of Peace.

As a Christian country, we must remember what his birth represents: peace, mercy, goodwill and, above all, hope.

I believe that we should also reflect on the fact that it is because of these important religious roots and Christian values that Britain has been such a successful home to people of all faiths and none.

So, as we come together with our loved ones, in safety and security, let’s think of those who cannot do the same.

Let’s give thanks to those who are helping the vulnerable at home and protecting our freedoms abroad.

And let me wish everyone in Britain and around the world a very happy and peaceful Christmas.

For many people Christmas is a time for relaxation, for catching up with friends and family. But many won’t be getting a break.

Hospital staff for whom Christmas is as busy as any time of the year. The firefighters on call, including those who recently helped save people and homes in communities like ­Cockermouth and Carlisle.

The police and our armed forces too. And the many workers in low-paid industries who simply cannot afford to take leave over Christmas.

Christmas is also a time for reflection, and it is worth considering the ­poignancy of the Nativity story. It is about offering shelter to a family in need and to those who find themselves ­refugees fleeing evil.

Homelessness in Britain is rising, more children are in poverty and tens of thousands will spend this Christmas in temporary accommodation – a home that is not their own.

Globally there are more refugees today fleeing horror than at any time since the Second World War.
These are lives that are being held back, young people who are not getting the opportunities they should.

We should always be asking ourselves – all of us, not just politicians – whether we could do more for others.

In this way, the Christmas story holds up a mirror to us all. “Do unto others as you would have done to you” – that is the essence of my socialism, summed up in the word ­“solidarity”.

The concept of solidarity is about our unity – we succeed or fail together. Yet too often there are attempts to divide us, to scapegoat, rather than help, those in need.

Jesus said: “It is more blessed to give than to receive”.

May you enjoy a merry Christmas as we all reflect on how we create a better world in 2016.