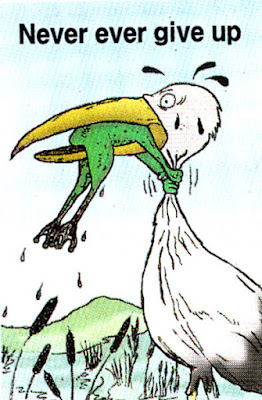 Do you ever feel like it’s all too much? That the Christian life is too hard? That the obstacles are too overwhelming?

The devil knows that as Christians we are secure in Christ; that nothing can separate us from his love (Romans 8:38-39), that he will never leave us nor forsake us (Hebrews 13:5) and that nothing can snatch us out of his hand (John 10:28).

But he can render us ineffective through immobilising and discouraging us; by tempting us to throw in the towel and to give up.

The battle is primarily in our minds. It starts with the thoughts we accept and believe. Once we get seduced by a self-destructive and immobilising thought the trajectory is all downhill.

Nehemiah was a man who did not allow himself to be disempowered by unhelpful thoughts – even if there was more than an element of truth in them.

He was the key figure, along with Ezra, who was used by God in the fifth century BC to help bring about one of the most profound revivals in biblical history.

Nehemiah was a skilful politician, a clever strategist, a brilliant manager, a social reformer who championed the rights of the poor and an intransigent visionary who never gave up despite threats and opposition from those in high places.

His achievements were monumental. He re-established full employment in a climate of economic recession. He reconstructed an effective social welfare system for the marginalised and reintroduced Bible exposition resulting in nationwide repentance and revival. He reinstated public worship and rooted out heresy and idolatry.

He was used by God to put a whole nation back on its feet.

But a key part of Nehemiah’s armoury was the ability to recognise and deal effectively with disempowering thoughts and accusations.

One of his major opponents – his bête noire as it were – was a local administrator called Sanballat who sought to distract him from his task of rebuilding the wall of Jerusalem.

Sanballat threw five immobilising thoughts at Nehemiah; the very same thoughts that the evil one uses with every Christian in order to dissuade him or her from pressing on with the task in hand. We read about his methods in Nehemiah 4.

First, he pointed out the weakness of Nehemiah and his Jewish brothers, ‘What are these feeble Jews doing?’ (Nehemiah 4:2). Of course the reality is that there was more than an element of truth in this. The Jews were weak and had few resources. But Sanballat had forgotten that God’s strength is made perfect in weakness (2 Corinthians 12:9) Nehemiah remembered and asked God to ‘Strengthen my hands’ (6:9).

Second Sanballat reminded Nehemiah of the immensity of the task, ‘Will they finish it in a day?’ The task of rebuilding the wall of Jerusalem was indeed immense, way beyond a day’s work. But this did not mean it was unachievable. Plenty of hands, good organisation and steady progress meant that a wall that had laid in ruins for 150 years was rebuilt in 52 days. It just required time and effort.

Sanballat’s third tactic was to point out the Jews’ record of past failures, ‘Will they revive the stones out of the heaps of rubbish, and burned ones at that?’ Again, it was true that they had failed God in the past. In fact, this was precisely why the wall lay in ruins now. But God is the one who promises to give us back the years that the locust has eaten (Joel 2:25), who gives us beauty for ashes (Isaiah 61:3), who specialises in building something great on the foundations of past failures.

Fourth, Sanballat mocked Nehemiah’s small amount of progress thus far, ‘if a fox goes up on it he will break down their stone wall’ (4:3). It was true that the beginnings of the project were unimpressive. But God is the champion in constructing great things from small beginnings; mighty oaks from tiny acorns; the leaven in the parable which spreads through the whole loaf.

Finally there was the strength of the opposition, ‘they all plotted together to come and fight against Jerusalem and to cause confusion in it’ (4:8). But Nehemiah ‘prayed to our God and set a guard as a protection against them day and night’ (4:9). And through it all the Jews just kept on building, with a sword in one hand and a trowel in the other; brick by brick, stone by stone until the job was finished.

I don’t know what particular project – large or small – that you are currently attempting for God and how discouraged you feel.

But let me remind you of this. However weak you are, however immense the task, however little you have achieved so far, whatever your record of past failure or the strength of the opposition you face, you can rejoice that you serve a God who uses weak people to do mighty things.

Put on his armour (Ephesians 6:10-20). Take the shield of faith to protect yourself from the enemy’s accusations and threats. Take the sword of the sprit - his word, the Bible - with its wonderful promises - and keep on building stone by stone, brick by brick. And never ever give up. For he who has called us is faithful and he will do it (1 Thessalonians 5:24).

Email ThisBlogThis!Share to TwitterShare to FacebookShare to Pinterest
Labels: Devotional