Doctors debate the complete decriminalisation of abortion at BMA ARM 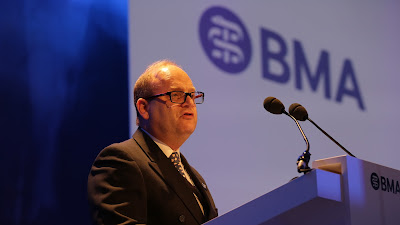 Doctors could back the complete decriminalisation of abortion in Britain next week.

On Tuesday 27 June the British Medical Association annual representative meeting in Bournemouth will vote on a motion seeking to end all legal restrictions on abortion.

Currently, abortion remains illegal in Britain under the Offences Against the Person Act 1861. Under this law both mothers attempting to abort on their own, or any other person (including doctors) seeking to help them, are potentially liable to life imprisonment.

But under the Abortion Act 1967 doctors can authorise abortion on several grounds relating to the health of mother or baby. Although the Abortion Act was intended to be restrictive, allowing abortion only in strictly limited circumstances, its provisions are very liberally interpreted leading to the situation where one in every five pregnancies ends in abortion.

There have been over eight million abortions in Britain since the abortion act came into being 50 years ago this year.  Department of Health figures for England and Wales released earlier this month show that there were 190,406 abortions in 2016 and that 98% of these were carried out on mental health grounds.

So in practice, although abortion is still technically illegal, the law is widely flouted and we have a situation tantamount to abortion on demand.

Now some doctors are seeking to decriminalise abortion completely.

The six part motion (motion 50), from the BMA agenda committee, is to be proposed by the BMA’s City and Hackney Division. It reads as follows:

It is likely that each part will be considered separately by the 500 BMA delegates with each section receiving a majority vote becoming official BMA policy.

The votes will follow an hour long presentation of a 52-page discussion paper on abortion decriminalisation which the BMA claims is ‘neutral’.

The British Pregnancy Advisory Service (BPAS), the country’s leading abortion provider, and the Royal College of Midwives (RCM) have campaigned heavily for a change in the law in recent months.

This culminated earlier this year in parliament voting by 172 votes 142 to support Diana Johnson’s radical Reproductive Health (Access to Terminations) Bill, which seeks to remove all legal restrictions on abortion (more here).

As this was a Ten Minute Rule Bill it will not become law but it is most likely that a very similar bill will be reintroduced following the Queen’s Speech later this month, either in the House of Lords or House of Commons.

In theory, Johnson’s bill would have made the 1967 Abortion Act defunct by scrapping section 58 and 59 of the Offences Against the Person Act, which make carrying out abortions, or supplying drugs or equipment for that purpose, illegal.

Johnson implied that the 1929 Infant Life (Preservation) Act, which makes it illegal to destroy a child ‘capable of being born alive’ (the act defines this as 28 weeks although many babies born as early as 23-24 weeks now survive), may also be scrapped under her plans. If so this would make abortion legal for any and every reason right up to term.

The BMA motion has been deliberately crafted to match the terms of Johnson’s bill as part of a wider campaign to change the law.

Johnson’s Bill is primarily backed by private abortion provider BPAS. The decriminalisation campaign specifically acknowledges that they are campaigning for a situation that would remove all gestational time limits for abortion. This position was affirmed by BPAS CEO, Ann Furedi, who said at the London launch of the campaign, ‘I want to be very, very clear and blunt... there should be no legal upper limit.’

If such a bill were to become law, and this would be far more likely with BMA backing, abortions could be carried out legally in any location, for any reason, potentially at any stage during pregnancy.

Without legislation on abortion, practices such as sex-selective abortions, mail-order abortions and school nurses handing out abortions pills on school premises would all be perfectly legal. The conscience clause would also fall, meaning that health professionals might be forced to carry out abortions or lose their licenses to practise.

Last year the Royal College of Midwives support for the BPAS’ abortion up-to-birth campaign caused widespread condemnation from midwives, the media and the general public against this extreme proposal. Over 1,000 midwives have now signed the open letter asking for RCM position to be revoked.

If the BMA were to pass motion 50 it would be signalling that abortion should be treated in the same way as surgical procedures like having one’s appendix or tonsils taken out – requiring consent only.

It would also put the doctors’ trade union at odds with its historical ethical code and with public opinion in Britain.

The Hippocratic Oath forbids abortion in all circumstances and the Declaration of Geneva requires that doctors show the utmost respect for human life from the time of conception.

But this new motion, if passed, would entrench doctors’ position as abortion’s greatest facilitators.

The same poll found that 70% of women wanted to see the abortion time limit reduced to 20 weeks or below and that 91% of women favour a total and explicit ban on sex-selective abortion. Clearly, women want the law to be stricter on the legality and regulation of abortion, not laxer.

The BMA must not bow to the will of this small and extreme pressure group. Motion 50 needs to be voted down.


If you are a doctor or medical student, you can sign an open letter to the Chair of the ARM calling for the rejection of Motion 50. If not, you can still sign the Citizen Go petition.
Posted by Peter Saunders at 23:12