Over 1,000 doctors reject BMA abortion decriminalisation motion 50 – this is why 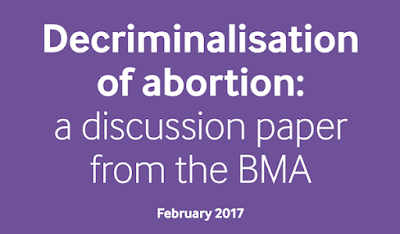 Over 1,000 doctors and medical students have signed an open letter urging the British Medical Association (BMA) to reject a motion calling for the complete decriminalisation of abortion. Also, just under 21,000 members of the public have signed a similar petition on Citizen Go.

Motion 50, which I have already reviewed in some detail, will be debated at the BMA annual representative meeting in Bournemouth at 10am on Tuesday 27 June. The debate will be streamed online via the BMA website.

The letter, titled ‘Reject motion 50’, hits out at extreme pro-abortion campaigners who have been working behind the scenes to get the BMA’s support ahead of a private member’s bill in Parliament calling for all abortion to be decriminalised.

The bill is expected to be drafted along the same lines as Diana Johnson’s radical Reproductive Health (Access to Terminations) Bill, which received some support in parliament earlier this year. At that time Maria Caulfield MP argued strongly against the bill, in a speech well worthy of study.

The doctors’ letter argues that the overwhelming majority of women do not wish to see abortion decriminalised and that if the BMA passes the motion it will not only be completely out of touch with the mood of the nation but will but will also severely damage the reputation of the medical profession.

Last year, the Royal College of Midwives saw a major media and public backlash following their announcement that they would be supporting a campaign to introduce abortion for any reason, up to birth. Many commentators on this controversy were pro-choice but recognised that taking this position was an extreme move, and the outrage caused reputational damage both to the Royal College of Midwives and to the wider midwifery profession. If the BMA follows suit, it will risk severely damaging its reputation as a professional body.

These alone are two good enough reasons to reject motion 50 but there are many more.

First, this whole campaign is based on the false premise that women who seek ordinary abortions are living under the constant shadow of arrest. That is clearly not the case. Prosecutions are already exceptionally rare under the existing criminal provisions [section 58/59 of the Offences Against Persons Act / Infant Life (Preservation) Act] and abortion is widely available under the terms of the Abortion Act. Prosecutions are exceptionally rare—in many years there have been none at all—and in the past two years there were just two convictions, both of them in extreme and disturbing scenarios. One involved a man who had attacked a pregnant woman and caused her to miscarry and the other a woman who aborted herself at 32 weeks.

Second, decriminalising abortion would remove abortion from the Offences Against Persons Act and render the Abortion Act null and void. This would mean that anyone at all could cause the death of an unborn baby in any way whatsoever, with or without the mother’s consent, and be liable only for any damage done to the woman. Furthermore, this could happen right up until 28 weeks, the statutory age of ‘viability’ under the Infant Life Preservation Act. Babies now survive in large numbers in neonatal units from 23-24 weeks so this would mean legalising abortion for babies aged 24-28 weeks who would normally be born alive – effectively legalising infanticide.

It would also dismantle the entire regulatory framework surrounding abortion – including the need for two doctors’ signatures, the 24 week upper limit, the need for approved premises, licensed drugs, conscientious objection, reporting and accountability.  Abortions could be done for any reason, by anyone, in any way and anywhere at any gestation up to 28 weeks. So that includes sex selection abortion, abortion to cover up rape, sexual abuse and incest, do-it-yourself abortion – it would mean abortion on demand.

Decriminalisation would also aggravate the problem of amateur or backstreet abortion and would surely lead to a huge increase in the availability, circulation and use of abortifacients. It would facilitate the procuring and supply of abortion pills, whether by women (including teenagers), who could lawfully take them and/or pass them round to their friends and acquaintances, or by men, not least those who have impregnated women and who would ‘encourage’ those women to take them.

Third, the tide is turning against decriminalisation in jurisdictions where it has been tried and found wanting. It appears that the abuses that have been seen in the two Australian states that decriminalised abortion previously (Victoria, 2008 and Tasmania, 2013) have made it clear to politicians and wider society that radical laws should not be more widely adopted.

Both New South Wales and Queensland have more recently rejected moves to decriminalise.  In fact, there are now moves underway to repeal the law in Victoria because of the problems there – an increase in the number of later abortions and abortion tourism (see here, here and here).

No decriminalised abortion model has yet shown to provide accurate abortion statistics. In jurisdictions like Canada and the states of Victoria and Tasmania, where abortion is decriminalised and largely deregulated, abortion data collection is unreliable or simply not recorded in any meaningful way. Canada, for example, recorded a 40% drop in the number of abortions between 2004 and 2010, due to a lack of data being reported by abortion practitioners. That said, all the current anecdotal evidence (see here, here and here) indicates a big increase in terminations post-24 weeks and a host of other problems such as a very sharp increase in babies born alive following termination.

Sex selection abortion is also fuelled by decriminalisation. In 2012 the Canadian Medical Journal reported that easy access to abortion and advances in prenatal sex determination have combined to make Canada a haven for parents who would terminate female fetuses in favour of having sons, despite overwhelming censure of the practice. A 2006 investigative report entitled ‘Canada’s lost daughters’ has highlighted how sex selection abortion has impacted on male female ratios in certain ethnic communities. In Brampton, Sikh areas had 109 boys to 100 girls and areas around Chinatown showed ratios of 108 boys to 100 girls.

In August 2016, the Care Quality Commission (CQC) had to step in to protect women from potential harm at Marie Stopes abortion clinics and their report in December showed doctors had been bulk-signing abortion consent forms, babies remains had been left in open bins, women were left at risk of infection, staff were not trained in how to respond to deteriorating patients and post-surgery safety checks were being completed before the surgery started.

An investigation by a national newspaper revealed in March 2017 that practices that concerned CQC inspectors are continuing at Marie Stopes clinics, with, for example, abortions being signed off by call centre workers with no medical training after discussions which were as short as 22 seconds.

Already within our current legal framework we have seen doctors pre-signing abortion forms, gender-selective abortions being offered, live babies being left to die following abortions that have gone wrong and children with minor disabilities, such as cleft palate, being aborted. In this context, where the current law is supposed to be preventing such appalling practices, the thought of allowing abortion, on demand, up to 28 weeks or even birth, is seriously worrying. If these kinds of breaches in patient safety protocols are occurring under the current law and close inspection of clinics, what would happen if all legal restrictions are lifted from abortion practice?

But fifth, and finally, the decriminalisation campaign ignores the key fact that abortion is not like other healthcare procedures because it involves the intentional taking of another human life. This is precisely why the law has always treated it differently from regular medical procedures, and continues to do so.

Not many people know that abortion is also against historic codes of ethics like the Hippocratic Oath, the Declaration of Geneva (1948) and the International Code of Medical Ethics (1949) or that in 1947 the British Medical Association itself called abortion 'the greatest crime'. Ironic indeed!

There are many good reasons for the BMA to give this decriminalisation motion short shrift on Tuesday. Let’s hope that it does so.
Posted by Peter Saunders at 12:47