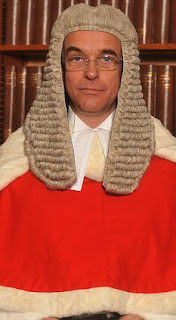 The case of M, a woman who suffered severe brain damage as a result of encephalitis in 2003, has just had its third day of hearings before Justice Baker (pictured) in the Court of Protection.

M's sister and partner want artificial nutrition and hydration to be removed with the explicit intention of ending her life. But the Official Solicitor is opposing them.

Under precedent established by the Bland judgement in 1993 it is now possible to make an application to the Court of Protection to withdraw artificial nutrition and hydration (food and fluids) from patients who are in permanent vegetative state (PVS). These patients are judged on the basis of clinical tests to have no awareness.

People with PVS are severely brain-damaged but not imminently dying and so they take usually between ten days to three weeks to die from dehydration. Thus far 43 have died in this way after court rulings.

M, however, is not in PVS but rather is in a ‘minimally conscious state’, meaning that she does have some degree of awareness; in effect she is in the next level up from PVS. She is not on a ventilator. But as she cannot eat or drink she does receive food and water through a thin feeding tube.

The case is hugely significant because of the British legal principle of ‘precedent’. This means that the principles established by this court ruling will be applicable in similar cases and will only be able to be overturned by a higher court, in this case either the Court of Appeal or the Supreme Court.

The Bland case in 1993 established legal principles which have now been given full statutory force in the Mental Capacity Act 2005. These included the principle that artificial nutrition and hydration constitutes ‘medical treatment’ that can be withdrawn if it is judged to be in a patient’s ‘best interests’ to do so. This highly controversial judgement has thereby enabled withdrawal of nutrition and hydration from PVS patients with the intention that they die – a situation that does not exist in most other European countries. Some have called it ‘euthanasia by omission’ or ‘euthanasia by the back door’.

If Justice Baker rules that M’s life can be ended, the arguments he uses in his judgement will have a crucial bearing on future similar cases. But the arguments currently being used by M’s sister and partner and their lawyers in the case actually equally apply to many people who are neither in PVS nor minimally conscious state.

In fact most are not arguments at all, but rather slogans, euphemisms or clichés. Let us consider some of them as reported in the Daily Mail today.

1. M’s younger sister broke down in tears on Monday as she told the Court of Protection she wanted to ‘end her suffering’.

But in what way is M actually suffering? And if she is minimally conscious how can we tell? If she is hardly aware then this cannot be mental suffering. And if it is physical suffering (eg. pain, nausea, thirst, hunger) then surely it can be ended without killing her - in the same way that we would end similar suffering in any other person - with pain relief, fluids, nutrition etc.

2. Vikram Sachdeva, for the relatives, says M's family felt that she would not want to live a life 'dependent on others'.

Are we saying that all people who do not wish to be dependent and cannot fend for themselves should be starved and dehydrated to death? And if she is minimally conscious how do we know what she actually wants?

3. M's sister - referred to as B - previously has told the court: 'She cannot enjoy a drink, a cup of tea or anything. She has got no pleasures in life.’

How do we know that she not able to experience pleasure? Her nurses claim that she smiles. And does not being able to ‘enjoy a cup of tea’ mean that life is no longer worth living? And are we saying that all people who say they have no pleasure in life and want to die for any reason should be able to end their lives?

4. 'Just a daily routine of being taken out of bed, put in a chair and put back in bed. Shower, doubly incontinent. It is just awful. It's not life. It's existence.’

Perhaps she may have expressed this view in the past but if she is minimally conscious then how do we know that this is her view now? And even if it was does this mean that others thereby have a responsibility to end her life? And why should M's sister be able to make this sort of decision?

6. 'I am just looking for a peaceful end for my sister. I know she would not want to carry on living like this.’

We all wish a peaceful end but is dying from dehydration and starvation peaceful? And why can’t a natural death be made peaceful with good palliative care?

7. ‘I cannot bear the thought she is going to live X amount of years in this state. It is cruel. There is no point to it and she would say exactly the same.'

Who is really suffering here? Is it M who we are told in minimally conscious and aware of very little? Or is it really her sister and partner who ‘cannot bear the thought she is going to live X amount of years in this state. Whose suffering are we really talking about relieving here? And are we saying that we should be able to end one person’s life because someone else can’t bear to see them this way?

8. Mr Justice Baker... said that it is a 'unique case' that raises 'very important issues of principle'.

Can Justice Baker really be serious? Yes indeed it certainly raises very important issues of principle. But the key thing about this case is precisely that it is not unique - there are thousands of other cases in Britain which raise similar issues about dependence, suffering, meaning, being a burden etc - which is precisely why this judgement could be so far reaching, of such public importance and potentially so dangerous.

The point is that the above arguments all apply equally to many people who are not minimally conscious, and therein lies the problem. If any of them are accepted as a justification for ending this woman’s life, then it will create a legal precedent for them to be employed as a justification for ending the lives of others who are the next step up from minimal awareness, and so on. Better not to go there.

My position is really very simple – people who are severely brain-damaged, but not imminently dying, should be given nutrition, hydration, symptom relief and warm human interaction until the day that they die peacefully and naturally. We don’t kill them either by giving them lethal injections or dehydrating them to death and we ensure that there is adequate legal protection in place so that no one who has an interest in their deaths, whether financial or emotional or to get rid of an unwelcome care burden, should be able to exploit or harm them in any way.

We will all be watching Justice Baker very carefully because whatever he decides will have repercussions for many more people than Ms B, for better or for worse.
Posted by Peter Saunders at 15:59