Matthew Parris – defender of the faith 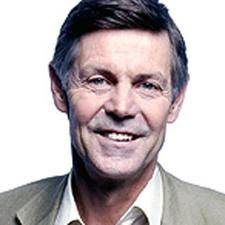 Which former Conservative MP won an RSPCA medal for saving a dog which had fallen in to the Thames, served as an aide to Margaret Thatcher, holds the record for the fastest marathon by an MP (2:32:57!), drove a Morris Oxford across Africa whilst a teenager, controversially suggested (in jest) stringing piano wire across country lanes to decapitate cyclists, is in a civil partnership with David Cameron’s chief speech writer Julian Glover and is now one of Britain’s most famous political journalists.

The answer, of course, is Matthew Parris.

Parris reacted last week to the recent debate about redefining marriage by suggesting that the word ‘marriage’ should be completely removed from legal language, but it was his comments this week in the Spectator about Christianity that have attracted more attention.

‘As an unbeliever’, he said, ‘I wish to complain on behalf of serious religious belief. Faith is being defended by the wrong people, in the wrong way. As an unbeliever my sympathies are with fundamentalists. They seem to me to represent the source, the roots, the essential energy of their faiths. They go back to basics.’

He laments the decline of true religion: ‘Anglicanism has become bland. Moderate Islam is in theological retreat. And surely it is at the liberal end of Judaism’s spectrum that faith dilutes.’

In words that might even have come from the pen of CS Lewis, he asks of the comfortable faith promulgated by the Church of England:

‘Does it capture what Jesus Christ asks — requires, commands — of His followers?One of the reasons we can be pretty sure Jesus actually existed is that if He had not, the Church would never have invented Him. He stands so passionately, resolutely and inconveniently against everything an established church stands for. Continuity? Tradition? Christ had nothing to do with stability. He came to break up families, to smash routines, to cast aside the human superstructures, to teach abandonment of earthly concerns and a throwing of ourselves upon God’s mercy. Jesus came to challenge precisely what today’s unbelieving believers in belief so prize in what they presume to be faith.’

He then cuts right to the key issue that is ignored by so many contemporary commentators about Christianity.

‘To those who truly believe, the implicit message beneath “never mind if it’s true, religion is good for people” is insulting. To those who really believe, it is because and only because what they believe is true, that it is good. I find David Cameron’s remark that his faith, “like Magic FM in the Chilterns, tends to fade in and out”, baffling. If a faith is true it must have the most profound consequences for a man and for mankind. If I seriously suspected a faith might be true, I would devote the rest of my life to finding out.

Just last December, in another piece titled ‘Stand up for your faith: tolerance isn’t enough’(£), he agreed with David Cameron that ‘lively faith in a deity can bring many social and cultural benefits’ but noted that ‘he took care to avoid straying into the question that matters most’.

And what is that? In John Betjeman’s words:

In a 2008 Times article titled, ‘As an atheist, I truly believe Africa needs God’ he wrote after a return to the Africa of his boyhood that ‘Missionaries, not aid money, are the solution to Africa's biggest problem - the crushing passivity of the people’s mindset’.

‘Now a confirmed atheist, I've become convinced of the enormous contribution that Christian evangelism makes in Africa: sharply distinct from the work of secular NGOs, government projects and international aid efforts. These alone will not do. Education and training alone will not do. In Africa Christianity changes people's hearts. It brings a spiritual transformation. The rebirth is real. The change is good.

I used to avoid this truth by applauding - as you can - the practical work of mission churches in Africa. It's a pity, I would say, that salvation is part of the package, but Christians black and white, working in Africa, do heal the sick, do teach people to read and write; and only the severest kind of secularist could see a mission hospital or school and say the world would be better without it. I would allow that if faith was needed to motivate missionaries to help, then, fine: but what counted was the help, not the faith.

But this doesn't fit the facts. Faith does more than support the missionary; it is also transferred to his flock. This is the effect that matters so immensely, and which I cannot help observing…. We had friends who were missionaries, and as a child I stayed often with them; I also stayed, alone with my little brother, in a traditional rural African village. In the city we had working for us Africans who had converted and were strong believers. The Christians were always different. Far from having cowed or confined its converts, their faith appeared to have liberated and relaxed them. There was a liveliness, a curiosity, an engagement with the world - a directness in their dealings with others - that seemed to be missing in traditional African life. They stood tall….

Whenever we entered a territory worked by missionaries, we had to acknowledge that something changed in the faces of the people we passed and spoke to: something in their eyes, the way they approached you direct, man-to-man, without looking down or away. They had not become more deferential towards strangers - in some ways less so - but more open.’

It makes one wonder why Parris, having these insights, is not yet a Christian. He doesn’t say. I can almost imagine Jesus saying to him, as he did to that wise man who questioned him about the core of morality, ‘You are not far from the Kingdom of God’. But I also sense a bit of the rich young ruler, who was attracted to Christ but went away sad when he was asked to lay aside the most precious thing in his life, leave everything and follow him.

It is of course essential to come to the point where you see that Christianity is true, that Christ really is who he claimed to be, and that finding and following him is what life is all about.

But it is not enough. At that point one must take one’s cross and follow him, with all that that involves.
Posted by Peter Saunders at 09:22