Gay partnerships – how far should we go in tolerating ‘evangelicals’ who endorse them? 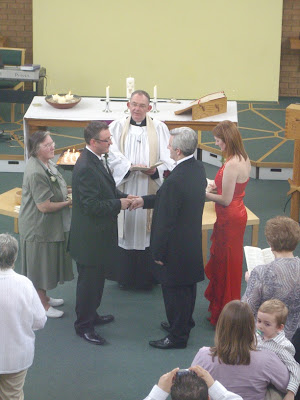 The Bishop of Liverpool, James Jones (£), and Baptist minister Steve Chalke have both recently come out in support of the church affirming monogamous gay (sexual) partnerships.

James Jones says that gay partnerships are among a number of major moral issues where ‘the church allows a large space for a variety of nuances, interpretations, applications and disagreements’.

Steve Chalke has written a special liturgy for gay partnerships that he has published on his Oasis charity website along with a full ‘evangelical exegesis’ of his pro-gay stance (More here and here).

The House of Bishops’ pastoral statement on civil partnerships of July 2005 specifically precludes the clergy of the Church of England from conducting services of blessing for those who have entered into a civil partnership.

It states: ‘Clergy of the Church of England should not provide services of blessing for those who register a civil partnership.’

Steve Clifford, general director of the Evangelical Alliance (EA), has said that he believes the conclusions Chalke has come to on same-sex relationships are wrong. He has also expressed ‘sadness and disappointment’ at the way Chalke, an EA member, ‘has not only distanced himself from the vast majority of the evangelical community here in the UK, but indeed from the Church across the world and 2,000 years of biblical interpretation’.

And yet both Justin Welby, the new archbishop of Canterbury, and Steve Clifford seem committed to an ongoing dialogue with those with whom they disagree. Welby has called for the church to disagree ‘gracefully’ over gay marriage and Clifford has stressed that ‘as we have this discussion let's remember that Jesus requires us to disagree without being disagreeable’.

Am I alone in finding this all rather disturbing?

To Jones and Chalke, the issue of whether or not one should bless gay partnerships is a secondary issue on which evangelicals can legitimately take different positions – in other words both views (acceptance and rejection of gay partnerships) fall within the boundaries of evangelicalism.

Neither is offering his resignation. This is particularly interesting given that the Courage Trust resigned from EA in 2002 when it decided to take the same position on gay partnerships that Chalke is now espousing and affirming.

But it seems to me also that, in spite of Clifford’s and Welby’s clear personal stance on the issue (both take the orthodox position that the only context for sex is within monogamous, heterosexual marriage), in practice they appear to regard gay partnerships as being in the category of what Paul called ‘disputable matters’,  issues (of the Romans 14 and 1 Corinthians 8 & 10 variety) on which evangelical Christians can legitimately disagree and yet remain 'in fellowship'.

I say ‘in practice’ because they appear to be taking the view that those who hold to and teach Jones’ and Chalke’s view on gay partnerships should be debated with ‘gracefully’ and ‘agreeably’ rather than being disciplined.

This approach seems to be at odds with EA's own official position which reads as follows (emphasis mine):

'We believe both habitual homoerotic sexual activity without repentance and public promotion of such activity are inconsistent with faithful church membership. While processes of membership and discipline differ from one church to another, we believe that either of these behaviours warrants consideration for church discipline'

EA appears not to be abiding by its own policy but a far more important question is, 'Does ongoing 'gracious debate' square with what the Bible teaches?' I’m not at all sure that it does.

Old Testament teaching on sexuality (detailed in Leviticus 18 & 20) makes it very clear that the only proper context for sexual relations is within (heterosexual) marriage. These two chapters straddle Leviticus 19 with its injunctions to ‘Be Holy because I the Lord am holy’ (19:2) and to ‘love your neighbour as yourself’ (19:18).

Jesus upholds the creation ordinance of marriage (Matthew 19:4-6) and indicates that sexual purity goes beyond mere actions to thoughts and motivations (Matthew 5:27-32).

Paul points out the unique nature of sexual sin (porneia) in that it involves sin ‘against one’s own body’ (1 Corinthians 6:18-20) and argues that sexual purity is part of sanctification, living a holy life (1 Thessalonians 4:3-8).

Furthermore we receive the grave warning in Revelation (21:8 and 22:15) that the unrepentant sexually immoral are destined for the lake of fire and will not partake of the tree of life.

The Bible is also very clear that homosexual practice in particular, as well as being included within the boundaries of sexual immorality (porneia), is also a specific marker of a society that has turned its back on God – Genesis 19, Judges 19 and Romans 1 are familiar examples.

Sex outside marriage is viewed very seriously indeed in Scripture but false teaching which leads people into sexual sin is viewed even more seriously (Luke 17:1-2) and warnings about the affirmation and endorsement of sexual immorality (2 Peter 2 and Jude are poignant examples) are particularly strong.

Those who raise these uncomfortable issues in the church are often are told ‘not to judge’, but the Bible is very clear that in the case of sexual immorality or false teaching it is actually our responsibility as Christians to ‘judge’ and to exercise discipline (1 Corinthians 5:1-13).

When there was a serious issue that threatened the integrity of the early church (with whole groups being led astray) the apostles called a council. We read about it in Acts 15. The matter (in that case circumcision) was seen as serious and meriting prompt action. It is interesting that one of the conclusions of that first council was that all Christians were to avoid sexual immorality (Acts 15:29). When the church has encountered other serious issues throughout the centuries councils have similarly been called to bring resolution.

I am no expert on church history and cannot ever recall a church council specifically on sexual morality but I can also not recall a time in history when senior church leaders sought to affirm or bless sexual behaviour that the Bible clearly teaches is immoral.

Can we imagine the apostle Paul leaving a situation like this to smoulder and fester? Would he not rather have urged his co-workers to ‘command certain men not to teach false doctrines’ (1 Timothy 1:3) and to ‘gently instruct in the hope that God will grant repentance’ (2 Timothy 2:25). Would he have not insisted that false teachers ‘must be silenced’ (Titus 1:11)?

Do we really think that Jesus himself, given his clear warnings about the dangers of false teaching, would have allowed a situation like this to persist unchallenged? Should we be acting any differently? Is it really enough to ‘disagree without being disagreeable’ and to debate ‘gracefully’?

When false teaching is allowed to fester in the church, and when godly discipline is not exercised with those who are propagating it, whole households, churches and communities can be ruined (Titus 1:11).

I am becoming increasingly uneasy about how we evangelicals have allowed this particular situation to drift. I believe that the time for tolerance and discussion is over and that we need now to act.
Posted by Peter Saunders at 15:15