The real meaning of Easter: Why did Jesus have to die? 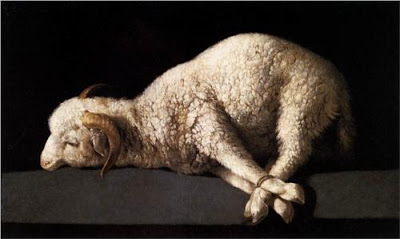 ‘Agnus Dei’ (literally Lamb of God) is an oil painting of a bound lamb upon an altar by Francisco de Zurbarán which was started in 1636 and completed in 1640.

The version opposite is one of six painted by the artist and hangs in the San Diego Museum of Art, USA.

It represents the teaching right at the very heart of the Christian faith whereby God makes peace with estranged and condemned human beings through the death of his Son Jesus Christ on a Roman cross.

Jesus is called the ‘Lamb of God’ because his death was an act of ‘substitutionary atonement’.

In other words Jesus died in our place receiving the judgement and wrath that our sins deserved.

We remember it on Good Friday, the day after the Jewish Passover.

This concept of ‘dying in our place’ has its roots in the very first book of the Bible -  in Genesis 3 -   where God protected Adam and Eve from his deserved judgement by turning them out of the garden of Eden and clothing them in the skin of slaughtered animals.

The theme is similarly central to Abraham’s offering of his son Isaac when God produced a sheep as a substitute.

Also in the Passover, preceding the Exodus, the blood of a firstborn lamb smeared on the doorposts and lintels of Israelite homes protected them from the wrath of God that fell on the Egyptians. God ‘passed them over’ and did not give them what they deserved.

Substitutionary atonement is also the basis of the Jewish sacrificial system whereby bulls, goats, sheep and pigeons were killed instead of the people to forestay God’s wrath, and also the Day of Atonement, six months after Passover, where one goat carrying the nation’s sin was slaughtered in the place of the people and a second was sent out into the wilderness never to return.

All of these were imperfect means by which a temporary reprieve was achieved for sinful human beings. They all foreshadow the death of Jesus, the Lamb of God on the cross. As Revelation, the last book in the Bible declares, Jesus was ‘the Lamb who was slain from the creation of the world’ (13:8).

As the writer of Hebrews informs us, ‘the same sacrifices repeated endlessly year after year’ can never ‘make perfect those who draw near to worship’ because it is ‘impossible for the blood of bulls and goats to take away sins’.

We can only be ‘made holy through the sacrifice of the body of Jesus Christ once for all… For by one sacrifice he has made perfect forever those who are being made holy’ (Hebrews 10:1-10).

It is said that God’s wrath and mercy meet at the cross. If God was purely a God of justice our judgement as a human race would have been immediate and final. But because God is also a God of mercy, He has provided a means by which our sin could be completely paid for.

The idea of substitutionary atonement, that Christ died in our place for our sins, is central to both Old Testament and New Testament.

Nowhere is it spelt out more explicitly in the Old Testament than in Isaiah 53, the last of the four servant songs, written 700 years before Christ was crucified but written in anticipation of it:

‘Surely he took up our pain and bore our suffering,
yet we considered him punished by God, stricken by him, and afflicted.
But he was pierced for our transgressions, he was crushed for our iniquities;
the punishment that brought us peace was on him, and by his wounds we are healed.
We all, like sheep, have gone astray, each of us has turned to our own way;
and the Lord has laid on him the iniquity of us all.’ (Isaiah 53:4-6)

The central theme in Isaiah 53 (v7) is that of the ‘agnus dei’, the Lamb of God, who ‘did not open his mouth’, was ‘led like a lamb to the slaughter’ and ‘as a sheep before its shearers is silent’.

The idea of substitutionary atonement is frequently returned to in the following verses of the chapter: ‘for the transgression of my people he was punished’, ‘the Lord makes his life an offering for sin’, ‘my righteous servant will justify many’, ‘he will bear their iniquities’, ‘For he bore the sin of many’.

In the same way substitutionary atonement is the central teaching of the New Testament.

Christ, Paul tells Timothy, ‘gave himself as a ransom for all people’ (1 Timothy 2:6). The writer of Hebrews adds that Christ ‘died as a ransom to set them free from the sins committed under the first covenant’ (Hebrews 9:15).

Peter sums it up in saying that ‘Christ also suffered once for sins, the righteous for the unrighteous, to bring you to God’ (1 Peter 3:18).

First is the metaphor of the altar of sacrifice. Christ is the sacrificial lamb whose blood is shed in our place. It is we who deserved to die but Christ substituted himself instead.

Second is the slave market. Christ paid the redemption price that we could not pay in order to free us from bondage. He bore the cost for us.

Third is the law court. Christ is our justification, that is, he took the punishment that we deserved in order than we might not be condemned.

Fourth is the metaphor of relationship. Christ’s death on our behalf brings reconciliation after our unilateral abandonment of God.

Like any metaphor, each of these illustrations provides merely a picture of what actually happened when Jesus died on the cross in our place. But in each case he did what we, in our weakness and sin, were unable to do (Romans 5:6-8).

He saves us from sin, judgement and Hell, to which we would inevitably be going had he not intervened at great personal cost.

The question for us is how we respond to this act of Jesus Christ.

Knowing that Christ, the creator and sustainer of the universe, whom we abandoned through passive indifference or active rebellion, sought us out and paid the ultimate price because it was the only thing that was sufficient to achieve our forgiveness and reconciliation, how can we possibly respond?

The only right response is surely to fall as his feet, to acknowledge him as master and deliverer and to give our lives to love and serve him – to come to him in repentance (turning from sin) and faith (trusting obedience).

And to those who do this he offers not only the forgiveness of sins – a clean slate – but also a renewed life and new nature (2 Corinthians 5:17), the power to change through the gift of the Holy Spirit (Romans 8:9), the gift of service (Ephesians 3:7), the certainty of eternal life (Jude 24) and the promise that nothing will ever separate us from his love for all eternity.

‘Who shall separate us from the love of Christ? Shall trouble or hardship or persecution or famine or nakedness or danger or sword?...  No, in all these things we are more than conquerors through him who loved us. For I am convinced that neither death nor life, neither angels nor demons, neither the present nor the future, nor any powers, neither height nor depth, nor anything else in all creation, will be able to separate us from the love of God that is in Christ Jesus our Lord’ (Romans 8:35-39).

(See also 'Jesus’ resurrection: what evidence is there that it really happened?')
Posted by Peter Saunders at 08:05