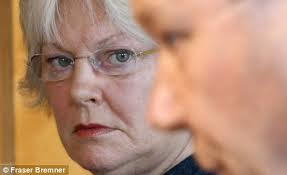 Margo Macdonald today announced that she is going to try again to legalise assisted suicide and/or euthanasia (it’s not clear which) in Scotland, just over a year after her last spectacular failure.

Ms MacDonald, Scotland’s only independent MSP, said in unveiling a new consultation on the issue, that she has ‘learned lessons’ from her previous attempt and is proposing a ‘clearer, more straightforward process’.

Among her new proposals is a suggestion that trained ‘licensed facilitators’ would need to be present when someone is at the point of ending their own life to ensure that lethal drugs are ‘taken correctly’.

But on who will actually qualify for assisted suicide under her bill she is less clear.

She told the BBC that it would be for those who are ‘suffering a terminal illness or condition, for whom life becomes intolerable’.

But then she told the Daily Record that it was for anyone who’s ‘life has been made intolerable by an irrecoverable illness’.

And the Scotsman quotes her as supporting assisted suicide when a patient’s life has ‘become intolerable to him or her as a result of their irreversible condition’.

So what is it Margo – ‘terminal illness’, ‘terminal condition’, ‘irrecoverable illness’ or ‘irreversible condition’?

And how are you defining ‘terminal’, ‘irrecoverable’ and ‘irreversible’?

Tetraplegia is usually irreversible but not terminal. Diabetes is ‘irrecoverable’ without treatment but not ‘irreversible’ with it. Leukemia is ‘terminal’ but not irrecoverable if managed properly. And literally hundreds of thousands of British people suffer from conditions like rheumatoid arthritis, Parkinson’s disease, multiple sclerosis and chronic bronchitis which are ‘irrecoverable’ but partly reversible and not terminal.

We will have to wait and see Ms Macdonald’s specific proposals but thus far they are rather confused and do not sound much different from those in her last ‘End of Life Assistance (Scotland) Bill’ which the Scottish Parliament rejected overwhelmingly by 85 to 16 at its first stage debate in November 2010.

On that occasion 87% of all who made written submissions to the scrutinising committee were opposed to it and the committee overwhelmingly recommended that it be rejected. Scottish GPs later added their voices to those calling for it to be dumped.

MSPs rejected Ms Macdonald's last attempt to legalise physician-assisted suicide and euthanasia in Scotland recognizing that such a move would seriously endanger public safety. Instead they sent a ringing endorsement to making the very best palliative care widely available and accessible.

The key argument that decided the last vote and the similar votes in the House of Lords in 2006 and 2009 is a simple one: 'The right to die can so easily become the duty to die.'

Vulnerable people who are sick, elderly or disabled can so easily feel pressure, whether real or imagined, to end their lives so as not to be a burden on others.

Ms Macdonald’s new proposals sound very much like the old ones dished up again. I expect the Scottish parliament to give them short shrift.