BBC article on ‘gay therapies’ is simplistic, misleading and ignores much of the available evidence 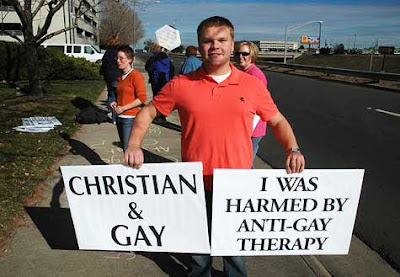 Should people with unwanted feelings of same-sex attraction seek professional help? And if so what kind of help and what expectations should they realistically have?

BBC Religion and Ethics have today published an article on this extremely controversial subject titled ‘Ex-gay survivor's tales of exorcism in middle England’.

I was asked to submit a quote for it yesterday but was unable to obtain any information about what angle the author would be writing it from. So I sent in four carefully drafted sentences of which they used only the one that most closely fitted with their agenda.

The article relates the story of Peterson Toscano, who ‘after $30,000 for controversial conversion therapy, three attempts at exorcism and one failed marriage, finally resolved the conflict between his faith and sexuality - he was gay’.

Toscano's case highlights the dangers of well-meaning Christians without proper professional training doing more harm than good in attempting to, in effect, ‘pray the gay away’.

But the article throws the baby out with the bathwater. Its fundamental flaw is to argue from the particular to the general, that is, because this man’s personal experience was negative therefore all attempts to help people with unwanted same-sex attraction are misguided and bad.

This conclusion is unwarranted and not actually supported by the available evidence.

I’m not going to comment on the individual case, but rather make some comments on the general issue.

There is first a huge amount of confusion both in the Christian church and in the world generally about the difference between homosexual attraction, orientation, identity and behaviour, which I attempt to address in my earlier blog, ‘Should gay Christians be true to their feelings?’

But there is even more confusion about what the media has unhelpfully branded ‘reparative therapies’.

The full quote I gave the journalist who wrote today’s BBC article read as follows:

‘Many people believe that homosexual and heterosexual are distinct biological categories which are unchangeable, biologically fixed and genetically determined but this view is being increasingly challenged by new research. Sexual attractions are now best understood as lying on a spectrum rather than in terms of a simple dichotomous binary categorisation, and mixed patterns of sexual desire, including attraction to both sexes at the same time and changes in the strength and direction of sexual attraction over time are not uncommon. It is on this basis that some people understandably will seek professional help in dealing with their changing feelings. Professionals providing such care should do so in a way that both respects the beliefs and values of the person seeking help and is also evidence-based.’

They chose only to use the last sentence, I suspect because the other three, about the fluidity of sexual feelings, did not fit with the underlying presupposition of the article that sexual orientation is something fixed, unchangeable and genetically determined and that the only approach to people experiencing feelings of same sex attraction is to encourage them to embrace a ‘gay lifestyle’.

Instead the latest research supports the idea that, for some, sexual feelings are often quite fluid and changeable. Many gay rights commentators including Peter Tatchell and Matthew Parris share this view.

This leaves us then with the question of how to help those who are experiencing ‘unwanted’ feelings of same sex attraction.

On this I would particularly recommend a booklet published last year and available on the CMF website titled ‘Unwanted same sex attraction: Issues of pastoral and counselling support’.

The whole booklet is worthy of careful study but I have pasted part of the executive summary below which amplifies on what I said in my quote:

People with unwanted SSA who seek to live in conformity with their beliefs should be free to receive appropriate and responsible practical care and counsel. Most may choose counselling and pastoral support to maintain, within a Christian ethical framework, the disciplines of chastity. Others may wish to explore the possibility of achieving some degree of change in the strength or direction of unwanted sexual interests.

Experience of change in the strength or direction of one’s sexual interests is sometimes possible. Although the extent of such change will differ between individuals, what is commonly referred to as sexual ‘orientation’ is not invariably a fixed and enduring characteristic of the human condition, rooted in biological difference and experienced from birth. Whilst some people experience same-sex attraction from their earliest memories of sexual interest, for others sexual desire can be relatively fluid. There are many personal narratives of change of sexual ‘orientation’ reported in both the secular and religious media. When assessing counselling efforts that seek to promote ‘change’ in the strength, direction, or expression of same-sex desire, the entire range of human sexual experience must therefore be addressed rather than assuming all sexual attraction is always fixed.

No high quality scientifically controlled trials have been carried out on efforts to promote change in sexual ‘orientation’ and claims for or against the effectiveness of specific approaches must therefore be treated with caution. ‘Sexual Orientation Change Efforts’ have provoked passionate opinions on all sides. Various mental health bodies and professional associations have made negative declarations about their desirability and effectiveness. It has been asserted that there is ‘no evidence’ that efforts to promote change in sexual ‘orientation’ are effective. Such statements, if allowed to stand unqualified, are potentially misleading. Because no randomised controlled trials have been carried out in this area, it is not possible to assert conclusively whether efforts to promote ‘change’ are effective or whether they are not effective. There is no ‘cast iron’ evidence either way. A balanced and objective assessment would note there are many personal reports of change in sexual orientation from within both secular and religious cultures, but that there remains uncertainty about the effectiveness of any particular psychological or counselling approach designed to promote such change.

Health and counselling professionals must practice ethically by respecting the religious beliefs and convictions of their clients and exercising due care in distinguishing between fact and personal opinion.

Given the absence of conclusive, high quality, scientifically controlled trials, those offering formal counselling to people with unwanted SSA must exercise considerable caution. They must follow conventional ethical guidelines in terms of informed consent and show respect for client autonomy and self-determination. When counselling clients with unwanted SSA, harm could result from raising unrealistic expectations or claims that go beyond the available evidence.

Those with unwanted SSA who seek to live within the orthodox boundaries of Christian faith and ethical practitioners who support them deserve our honour, support and respect. Both groups should be free to act in accordance with their conscientious beliefs without harassment, misrepresentation or discrimination.