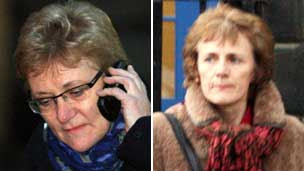 Two Roman Catholic midwives who lost a legal battle to avoid taking part in abortion procedures have launched an appeal at the Court of Session.

The outcome of the case will be crucial in defining the scope of the conscientious objection clause in the 1967 Abortion Act and a ruling is expected in the spring.

Last February Mary Doogan, 58, and Concepta Wood, 52, had argued that being forced to supervise Glasgow health board staff taking part in abortions violated their human rights.

But a judge ruled that since they were not directly involved in terminations they did not have a right to conscientious objection.

The current appeal is taking place before three judges in Edinburgh and could go eventually to the UK Supreme Court.

The midwifery sisters were employed as labour ward co-ordinators at the Southern General Hospital in Glasgow and had given notice of their conscientious objection under the abortion law many years ago, but became concerned when all medical terminations were moved to the labour ward in 2007.

They claimed that previously they were not called on to delegate, supervise or support staff engaged in the care of patients undergoing terminations.

The midwives had also claimed that the health board decision breached their rights under Article 9 of the European Convention on Human Rights which guarantees the right to freedom of religion.

But last February Lady Smith, the judge, said she was not satisfied that their Article 9 rights were being interfered with and that their right of conscientious objection was not unqualified.

She added that because ‘the nature of their duties’ did not ‘require them to provide treatment to terminate pregnancies directly’ they were not covered by the conscientious objection clause in the Abortion Act either.

Section 4 of the Abortion Act 1967,’Conscientious objection to participation in treatment’ reads as follows:

'(1) Subject to sub-section (2) of this section, no person shall be under any duty whether by contract or by any statutory or other legal requirement to participate in any treatment authorised by this Act to which he has a conscientious objection.'

The full scope of this clause has not been fully tested in the courts but centres around what meaning is given to the word ‘participate’. Whilst it is clear that it covers those directly involved in the abortion itself, the Janaway case ruling (see note below) held that it did not cover a receptionist who refused to type an abortion referral letter.

Lady Smith ruled that it did not cover those who are asked to ‘delegate, supervise or support’ staff carrying out abortions either.

Part of the problem is that the Royal College of Midwives, the trade union for midwives, has gone beyond the current letter of the law in its interpretation but it remains to be seen how much this stance will influence the current ruling.

This obviously creates real difficulties for anyone with a moral objection put in this position, many of whom (including myself) would view delegation, supervision or support as participation.

The Abortion Act has led to over seven million babies losing their lives since 1967.

But I do not believe that 'supervising' the shedding of innocent blood is an option for Christians, even if the law does not allow us the option of conscientious objection.

I have argued this case in more depth on biblical grounds previously on this blog.

The ruling, when it comes, will create a precedent not just for nurses but quite possibly for doctors also and I will be following the case with great interest.

The legal principle is certainly worth fighting for and, whether they win or lose, by making a stand on this issue, these midwives have set a good example for others to follow and deserve our prayerful support.

'Blessed are those who are persecuted because of righteousness, for theirs is the kingdom of heaven. Blessed are you when people insult you, persecute you and falsely say all kinds of evil against you because of me. Rejoice and be glad, because great is your reward in heaven, for in the same way they persecuted the prophets who were before you.' (Matthew 5:10-12)