What causes homosexuality Peter Tatchell? Well it depends on which view is most politically convenient at the time 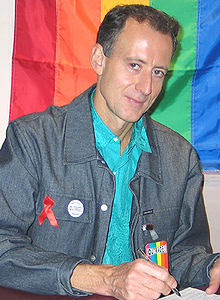 Yesterday in Parliament I attended a meeting where four leading figures engaged in a lively debate on therapy for those with unwanted feelings of same-sex attraction.

The debate focussed on the legitimacy of, and freedom to offer, ‘change therapy’ (more accurately SOCEs - sexual orientation change efforts), which is aimed at altering the strength and direction of sexual feelings.

Dr Michael Davidson of CORE Issues (who is about to undergo a disciplinary procedure for using it) and Canadian psychiatrist Dr Joseph Berger (who uses it regularly) were supporting change therapy.

Psychiatrist Professor Michael King (who is its most vehement critic) and gay rights campaigner Peter Tatchell were against it.

I will come back to King in another blog but I was particularly intrigued by the hard line position taken by Tatchell.

Tatchell (pictured) summed up his position on the causes of homosexuality by dismissing cultural and environmental factors: ‘The overwhelming mass of scientific and medical evidence shows that homosexual orientation is the product of inheritance and hormonal influences in the womb.’

King, the scientist, wasn’t anywhere as dogmatic about this and suggested that no one really knew the cause. Tatchell, however, firmly stood his ground.

To those who are acquainted with Tatchell’s writings this announcement marked a huge departure from his previous stance. Rather than accept the view that people are born gay, he has actually been one of its chief opponents.

On his own website in an article titled ‘Born or Made Gay?’ he argues as follows:

‘Something as complex and pivotal as human emotional and sexual life is bound to evolve from a multiplicity of factors, rather than from any single, simple origin… biological determinist models of gayness suggest that same-sex attraction is largely or entirely determined by our genes and hormonal influences in the womb. It is an innate desire, fixed at birth….

This was the central thesis of the recent book, Born Gay, by Glenn Wilson, a Reader at the Institute of Psychiatry in London , and Qazi Rahman, a lecturer in psychobiology at the University of East London . Their book is easily the best summary of evidence from dozens of biological studies into the causes and correlates of homosexuality.

They conclude that sexual orientation is overwhelmingly innate. Social or family influences have little or no impact. Blaming parents and childhood upbringing for a child's gayness is mistaken and unfair. The idea that people become gay by seduction or choice is, they say, not supported by scientific research and empirical evidence…

The authors are right to say that biological factors play a role. Studies of identical twin brothers show that in 52% of cases where one twin is gay the other twin is also gay (Note - later studies suggest this figure is closer to 20%). This is a much higher concordance than the 2% to 10% distribution of gay people in the general population, as recorded by various sex surveys. It suggests a significant genetic component in the causality of homosexuality - and, presumably, in the origins of heterosexuality as well.

Wilson and Rahman argue the other determinant of sexual orientation is hormonal exposure during pregnancy. They document studies showing differences between gay and straight people with respect to a number of physiological traits that are associated with hormonal influences...

This is convincing stuff, but not entirely so. If genes determine our sexual orientation we would expect that in cases of identical twins where one was gay the other would be gay too – in every case. But, in fact, in only just over half the cases are both twins gay. The same lack of complete concordance is found in hormone-associated physical attributes.

These exceptions lead me to conclude that while genes and hormones may, like male birth order, predispose a person to a particular sexual orientation, they do not determine it. They are significant influences, not the sole cause. Other factors are also at work. Social expectations, cultural values and peer pressure, for instance, help push many of us towards heterosexuality...

Wilson's and Rahman's biological determinist thesis has another major flaw. If we are all born either gay or straight, how do they explain people who switch in mid-life from fulfilled heterosexuality to fulfilled homosexuality (and vice versa)?

The authors have no credible explanation for bisexuality; claiming it barely exists… Much as I would love to go along with the fashionable ‘born gay' consensus (it would be very politically convenient), I can't. The evidence does not support the idea that sexuality is a fixed biological given.’

In another article on his website he takes an even stronger position:

‘Sexual orientation is largely or entirely determined by our genes and hormonal influences in the womb. It is an innate given, fixed at birth. Forget Freudian theory and all the other psycho babble. Biology is destiny.

This is the central thesis of Born Gay. I disagree…. If sexuality was predetermined at birth by genes and hormones, it would be impossible for young Sambian males to switch to homosexuality and then back to heterosexuality with such apparent ease. This suggests there is an element of flexibility in sexual orientation, and that cultural traditions and social mores are also influential factors.

Born gay? No. Human sexuality is too varied and complex to be reduced to a simple equation of genes plus hormones.’

When asked at the debate whether his views had changed Tatchell said that they had. When asked why, he said it was a result of reading ‘Born gay?’

But ‘Born gay?’ was written in 2008 and yet just last year in January 2012 Tatchell wrote an article for the Huffington Post titled ‘Future Sex: Beyond Gay and straight’ in which he takes exactly the same position as that expressed on his website:

‘We already know, thanks to a host of sex surveys, that bisexuality is an fact of life and that even in narrow-minded, homophobic cultures, many people have a sexuality that is, to varying degrees, capable of both heterosexual and homosexual attraction.

It is also apparent that same-sex relations flourish, albeit often temporarily, in single-sex institutions like schools, prisons and the armed forces - which suggests that sexuality might be more flexible than many people assume.

(Kinsey) found that human sexuality is, in fact, a continuum of desires and behaviours, ranging from exclusive heterosexuality to exclusive homosexuality. A substantial proportion of the population shares an amalgam of same-sex and opposite-sex feelings - even if they do not act on them…

…The evidence from these two research disciplines - sociology and anthropology - is that the incidence and form of heterosexuality and homosexuality is not fixed and universal, and that the two sexual orientations are not mutually exclusive. There is a good deal of fluidity and overlap.

… This picture of human sexuality is much more complex, diverse and blurred than the traditional simplistic binary image of hetero and homo, so loved by straight moralists and - equally significantly - by many lesbians and gay men.

If sexual orientation has a culturally-influenced element of indeterminacy and flexibility, then the present forms of homosexuality and heterosexuality are conditional. They are unlikely to remain the same in perpetuity. As culture changes, so will expressions of sexuality.

… Gay and lesbian identities are largely the product of homophobic prejudice and repression. They are a self-defence mechanism against homophobia. Faced with persecution for having same-sex relations, the right to have those relationships has to be defended - hence gay identity and the gay rights movement.’

So what exactly is Tatchell's position?

Does he really expect us to believe that in the last twelve months he has suddenly adopted the central thesis of a book he has consistently rejected for over four years?

If so why has he not said so up until this week?

Or is there another explanation altogether? Does Tatchell actually choose which view to hold depending on who he is talking to?

Tatchell is at very heart a campaigner and has already hinted above that the ‘fashionable “born gay” consensus’ would be ‘very politically convenient’ for him.

So maybe when he is arguing, as in Huffington Post, that in the future there will be no such thing as gay and straight but just fluidity, it is actually politically convenient to say that the main cause of sexual orientation is cultural and environmental.

But when he is making a case for disciplining people who are practising therapy aimed at changing the strength and direction of sexual attraction, it is more politically convenient for him to argue that sexual orientation is biologically fixed at birth as a result of genes and hormones.

And if he is trying to establish that gay people are a persecuted minority (very useful if you are pushing for a change in the law) then it is expedient to argue that gay and lesbian identities are largely the product of homophobic prejudice and repression.

I wonder which argument Peter Tatchell will use next?

I guess it will depend on who is listening and what his political agenda at the time happens to be.
Posted by Peter Saunders at 15:10