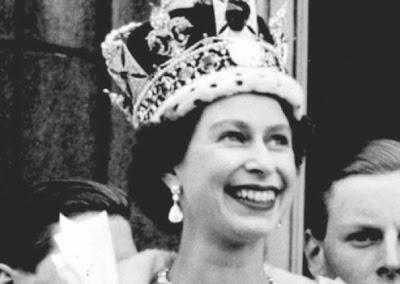 She was asked by the Archbishop of Canterbury, ‘Will you to the utmost of your power maintain the Laws of God and the true profession of the Gospel?’

She answered, ‘All this I promise to do.’

Gillan Scott has usefully catalogued on his blog excerpts from the Queen’s Christmas messages over the last few years and says, I believe correctly, that she has become ‘one of our nation’s greatest evangelists’.

And one does not have to look far in these speeches to see the evidence of her own faith in Christ and the Christian Gospel:

‘For me the teachings of Christ and my own personal accountability before God provide a framework in which I try to lead my life. I, like so many of you, have drawn great comfort in difficult times from Christ’s words and example.’ (2000)

‘I draw strength from the message of hope in the Christian gospel.’ (2002)

She sees both the beauty in man (being made in the image of God) but also our fallenness and need for redemption:

‘Although we are capable of great acts of kindness, history teaches us that we sometimes need saving from ourselves – from our recklessness or our greed. God sent into the world a unique person – neither a philosopher nor a general, important though they are, but a Saviour, with the power to forgive.’(2011)

She emphasises the historic truths at the heart of our faith, that Jesus died for our sins and rose from the dead:

‘…Jesus of Nazareth who, often in circumstances of great adversity, managed to live an outgoing, unselfish and sacrificial life.’ (2008)

‘His death might have been the end of the story, but then came the resurrection and with it the foundation of the Christian faith.’ (2000)

‘Forgiveness lies at the heart of the Christian faith.’ (2012)

And she goes on to emphasise what is at the very heart of the life of faith of the believer:

‘God sent his only son “to serve, not to be served”. He restored love and service to the centre of our lives in the person of Jesus Christ.’ (2012)

What is our rightful response to Jesus, she asks:

The heart, biblically speaking, refers to our whole selves – mind, will and emotions.

In Passion Week, just before his crucifixion, Pharisees and Herodians sought to catch Jesus out by asking him whether the Jews should pay taxes to Caesar.

The plan was to put Jesus in an impossible position.

If he said ‘no’ he would be in trouble with the Romans, the governing authorities. If he said ‘yes’ he would lose the popularity of the people.

His answer was brilliant:

Jesus knew their hypocrisy. ‘Why are you trying to trap me?’ he asked. ‘Bring me a denarius and let me look at it.’ They brought the coin, and he asked them, ‘Whose image is this? And whose inscription?’

‘Caesar’s,’ they replied. Then Jesus said to them, ‘Give back to Caesar what is Caesar’s and to God what is God’s.’ And they were amazed at him.

Roman coins carried the image of the emperor and so they belonged to the emperor.

This of course begged the question of what it was that carried the image of God.

The Pharisees, who in spite being hypocrites knew their Bibles, would have known the answer to this question.

The implication is clear. Human beings belong to God (Psalm 24:1) and so should give their hearts – their whole selves – to God.

This is what the queen, in upholding her coronation oath, encourages all of us to do.