Belgium’s meteoric rise to become euthanasia capital of the world

Please sign this petition to stop child euthanasia in Europe. It takes only a minute to do. 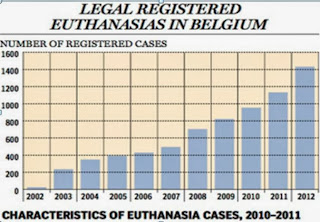 Assisted suicide is treated the same as euthanasia when reported, despite its position in law being unclear.

Here is a series of articles, both on this blog and elsewhere, which chart the steps in Belgium’s meteoric rise to become euthanasia capital of the world. Much of this material has not been covered by the British media in spite of the fact that Belgium is one of our very closest European neighbours.

Death by doctor: Controversial physician has made his name delivering euthanasia when no one else will
(National Post, 22 November 2013)

Belgian Senate will vote on bill to extend euthanasia to children with disabilities on 26 November
(Alex Schadenberg, 21 November 2013)

A deadly conflict of interest: why euthanasia in Belgium is so out of control
(Tom Mortier, 20 November 2013)

Fresh warning sounded to UK as euthanasia deaths increase by 25% in Belgium in just one year
(Alex Schadenberg, 2 March 2013)

Deaf twins killed by legal euthanasia had to search two years before they found someone who would do it
(National Post, 14 January 2013)