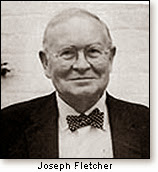 The Old liberalism had its roots in the radical biblical criticism of the 19th century. Old liberals doubted core Christian doctrines like the incarnation, Christ’s death and resurrection, his ascension and second coming, the authority of Scripture, justification by faith, the day of judgement, the sovereignty of God, and so on.

The New liberalism is actually orthodox on these things. New liberals will gladly tick the boxes of the church creeds and the doctrinal basis of the Evangelical Alliance and many of them know their Bibles well.

They are liberal not on what we might call the core beliefs of Christianity, but on ethics (for examples of the wide range of views on ethical issues amongst British evangelicals see here). They would argue that ethical issues are in the category of what Paul, in passages like 1 Corinthian 8 & 10 and Romans 14, called ‘disputable matters’.

‘Disputable matters’ are things on which Bible believing Christians can legitimately disagree whilst remaining in fellowship with one another. If you like they are in the same category as debates about the timing and amount of water to be used in baptism, the modus operandi of the Lord’s supper, the sequence of events around the return of Christ, forms of church government and the place of Israel.

I see this view as a revival of what in a previous generation was called ‘situation ethics’.

Situation ethics is a Christian ethical theory that was principally developed in the 1960s by the then Episcopal priest Joseph Fletcher (pictured).

Fletcher taught Christian Ethics at Episcopal Divinity School, Cambridge, Massachusetts, and at Harvard Divinity School from 1944 to 1970 and wrote ten books and hundreds of articles, book reviews, and translations.

Situation ethics basically states that other moral principles can be cast aside in certain situations if love is best served; as theologian Paul Tillich once put it: ‘Love is the ultimate law’.

Fletcher believed that in forming an ethical system based on love, he was best expressing the notion of ‘love thy neighbour’, which Jesus Christ taught in the Gospels.

He believed that there are no absolute laws other than the law of ‘agape’ love, meaning that all the other laws are only guidelines on how to achieve this love, and could be broken if an alternative course of action would result in more love.

In order to establish his thesis he employed a number of examples of ‘situations’ in which it might be justified to administer euthanasia, commit adultery, steal, tell a lie etc.

But in effectively divorcing ‘agape’ love from moral law Fletcher was steering a subtly different path from Jesus himself.

Jesus indeed said (Matthew 22:34-40) that the most important commands in the Old Testament Law were love of God and neighbour (Deuteronomy 6:5 and Leviticus 19:18). In fact he said these two commandments summed up the whole of Old Testament Law (Matthew 22:40 and Luke 10:25-28). Furthermore he criticised the Pharisees for obeying the less important parts of the law (tithing mint and cumin) whilst neglecting the ‘more important matters of… justice, mercy and faithfulness’.

But he also said that ‘anyone who breaks one of the least of these commandments and teaches others to do the same will be called least in the Kingdom of heaven’ (Matthew 5:19) and reproved the Pharisees by saying that they should have ‘practised the latter’ (important commandments) ‘without neglecting the former’ (lesser commandments).

Certainly there is no place in the Gospels where Jesus implies that those commandments which deal with the shedding of innocent blood and sexual immorality (numbers six and seven of the Ten Commandments) should be disobeyed.

By contrast he exhorts his disciples in the Sermon on the Mount to go beyond the mere legalities of ‘you shall not murder’ (6) and ‘you shall not commit adultery’ (7) to embody the very spirit of love which undergirds them. Not only no murder or adultery but no hate or lust either! (Matthew 5:21-30).

It is this more exacting moral standard that also underlies the ethical teaching in the epistles. Christians are exhorted to be imitators of Christ (1 Corinthians 11:1) and God (Ephesians 5:1&2), to walk as Christ walked (1 John 2:6) and to ‘abstain from sinful desires’ (1 Peter 1:11).

In short we are to live by the law of Christ (1 Corinthians 9:21 and Galatians 6:2) and to love one another as he has loved us (John 13:34-35). And love of Jesus means obedience to Jesus (John 14:15,21 and 15:12). In fact Jesus famously answered one of the Devil’s temptations in the wilderness by quoting from Deuteronomy, ‘Man shall not live on bread alone, but on every word that comes from the mouth of God’. Note every word.

If Christ had been directly tempted in such a way, and indeed he must have been if he was ‘tempted in every way, just as we are’ (Hebrews 4:15) as we are told he was, we can imagine him answering as he did in the wilderness, ‘It is written, “you shall not murder”, “you shall not commit adultery”’.

By my reading Situation Ethics is a distortion of biblical ethical teaching. It is, in short, heresy. But it is a heresy that appears to be very much alive and well amongst British evangelicals in the 21st century. No more clearly is it evidence than in the shifting views and lack of clarity amongst evangelicals about sexual morality and the shedding of innocent blood.

Interestingly, Fletcher later identified himself as an atheist and was active in the Euthanasia Society of America and the American Eugenics Society and was one of the signatories to the Humanist Manifesto. When he started out, his position was barely distinguishable from orthodoxy. But he finished up in a very different place altogether.

This is exactly what happens when we define ‘love’ in a different way from the way it is defined in the Bible.
Posted by Peter Saunders at 01:17