Why many British evangelicals are not that bothered with ethics 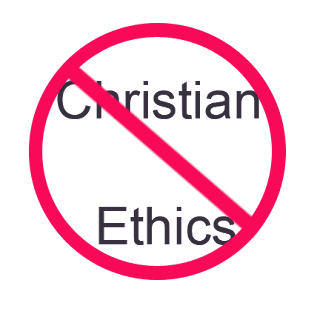 'If I profess with the loudest voice and clearest exposition every portion of the Word of God except precisely that little point which the world and the devil are at that moment attacking, I am not confessing Christ, however boldly I may be professing Him. Where the battle rages there the loyalty of the soldier is proved; and to be steady on all the battle front besides, is mere flight and disgrace if he flinches at that point.’

This famous quote has been attributed to Martin Luther, by Christian commentators as illustrious as Francis Schaeffer but, as argued convincingly by Carl Wieland, it actually comes from a 19th Century novel referring to Luther by Elizabeth Rundle Charles, called The Chronicles of the Schoenberg Cotta Family (Thomas Nelson, 1864).

However, according to Wieland, Luther did actually say something very similar. He said that if people were publicly open about every other aspect of their Christian faith, but chose not to admit their belief on some single point of doctrine (for fear of what might happen to them if their conviction on that one point became known) they were effectively denying Christ, period.

As Christians we are fighting in a spiritual battle, but Martin Luther’s point is that not all God's truth is equally under attack at any one time. In any culture and generation there are certain truths which are more under attack than others.

As Christians in 21st century Britain we need to be aware of which Christian truth is most under attack, and ensure that we are faithful in standing for that truth.

There are some Christian causes, which in Britain today are politically correct. If you campaign, for example, to end child poverty, to care for trees in the Amazon rainforest, to fight cancer, to clamp down on loan sharks, or to curb human trafficking you will find yourself in a large like-minded company of both believers and unbelievers.

This does not mean that these are not important causes for which Christian should fight. They are. But my point is that few if any will publicly oppose you for making a stand on them. Especially in the church, you will find many allies who will stand alongside you.

It’s terribly important that Christians and churches, particularly at a time of economic recession, are moving into food bank provision, debt counselling and street pastoring. The needs are great and we should be involved.

But if we restrict ourselves to those areas of Christian service that our society applauds, then we are actually being selective in our discipleship. Luther would even say we are denying Christ.

Most unbelievers are very accepting of Christians who support popular causes and it is tempting to imagine that if we are being good and faithful Christians everyone will like us, but Jesus actually said exactly the opposite (Luke 6:22).

Many people hated Jesus simply because he spoke truth that people did not want to hear – that is precisely why he was crucified. Likewise when we speak the same truth some people will hate us too (John 7:7).

Persecution began for the early church when Peter, John and Stephen opened their mouths and started to speak. We must of course speak the truth in love (Ephesians 4:15), but how often do we use 'sensitivity' simply as an excuse for cowardice, when our real underlying motive is actually to avoid being persecuted for the cross of Christ? (Galatians 6:12).

The high profile cases involving Christians getting into trouble with the law or governing authorities, with which we are all familiar, tend to involve a limited number of issues. Homosexuality is a particularly common theme – whether it is a couple running a bed and breakfast who wish to ensure their clientele sharing a double room are married, or street preachers addressing moral issues, or an Oxford student making casual remarks about a policeman’s horse.

When it comes to Christian doctors being hauled up before their NHS trusts, or being complained about to the General Medical Council, or being the subject of court proceedings, it is similarly a small number of issues that tend to feature.

If a Christian doctor wishes to opt out of abortion or gay adoption, or expresses views about these issues, or attempts to share the Gospel with a patient or colleague there are risks of losing one’s reputation, job or even licence to practise.

If you publicly express biblical views on subjects like abortion, euthanasia or sex you can become very unpopular indeed. Last year, in response to direct questioning on twitter, I expressed in simple terms what I regard to be an orthodox Christian view of sex. I said ‘All people are sinners (Romans 3:23) and also all sex outside marriage is morally wrong’ and ‘Sex between two people of the same sex - male or female - is always wrong’.

My responses were then retweeted by an atheist doctor (who was also gay!) to several thousand of his followers and I was buried for several hours under a barrage of the most unpleasant abuse you can possibly imagine.

I was recently out for a meal with a friend, with whom I have a great deal in common, who told me that he disagreed with me about three things.

While I was inwardly shaking my head with astonishment at ‘only three’ (!) my friend informed me that the three things in question were abortion, assisted suicide and homosexual practice.

My own view, as you might guess, is that abortion, assisted suicide and homosexual practice are not good ideas.

But the friend in question, an evangelical Christian and Bible college lecturer, felt strongly that there was a place for Christian involvement in all three. These views are not unusual.

The Evangelical Alliance surveyed 17,000 ‘evangelicals’, mainly at conferences like New Wine and Spring Harvest, in 2010 and published the results in January 2011 (See here and here).

Amongst the questions were one on each of abortion, assisted suicide and homosexuality. A wide range of views were expressed.

Remember that these are conference-going evangelicals and probably represent therefore a more committed section of the evangelical population.

Richard Dawkins' Foundation for Reason and Science (UK) found in a poll published last year that of those who called themselves ‘Christians’:

Why is it that so many Christians now have views on these issues that would have been considered anathema just a generation ago?

First, and perhaps obviously, the prevailing culture has shifted hugely on these questions. The so-called mountains of culture – parliament, universities, institutions, law, science, media, arts, entertainment – are increasingly dominated by people with an atheist world view. This new ‘liberal elite’ believes that God doesn’t exist, that death is the end and that morality is relative to each individual. But in practice most adopt the ethics of secular humanism. Undoubtedly this cultural change has affected the church.

Second, as I have already alluded to, taking a traditional view on these issues now carries a cost that it did not have a generation ago. In 2012, Christians in Parliament, an official All-Party Parliamentary Group (APPG), chaired by Gary Streeter MP, launched an inquiry called ‘Clearing the Ground’, which was tasked with considering the question: ‘Are Christians marginalised in the UK?’ Its main conclusion was that ‘Christians in the UK face problems in living out their faith and these problems have been mostly caused and exacerbated by social, cultural and legal changes over the past decade.’ There is loss of reputation, job and income to consider with certain Christian beliefs and behaviours.

Third, some Christian leaders with large followings, have changed their position on these issues. The Bishop of Liverpool, James Jones, and Baptist minister Steve Chalke are two examples of prominent Christian leaders who have come out this year in support of the church affirming monogamous gay (sexual) partnerships. There is intense speculation that the Church of England’s Pilling report is about to be published recommending the same thing.

Fourth, there has been a huge decline in Bible reading and study generally and in Bible teaching specifically. In particular there is very little teaching in our churches about ethical issues. This year, I was asked for the very first time in 20 years of ministry with CMF, to lead a seminar on abortion at a leading London evangelical church. We were told that it was being widely advertised through home groups and through the over 30 full time workers in a congregation of over 1,000. Twelve people turned up. I learnt later that the poor attendance was due to the fact that the leadership had not thought it important enough to advertise. Last week I was asked by the editor of a major denomination’s ministers’ magazine to write an article on the biblical case against euthanasia. He was concerned that many ministers in his (well known) Bible-believing denomination were of the view that euthanasia in hard cases was a genuine act of Christian mercy.

But, whilst these four factors play a part in accounting for what I would call ethical drift amongst Christians, I think the real reasons are more deeply theological. I would attribute them to two destructive heresies – one infecting liberal evangelical congregations and one infecting conservative evangelical ones. In both groups are many who actually know their Bibles very well, but who are increasingly adopting ethical views that are much closer to that of the prevailing culture than those held historically by the church.

I have recently reviewed each of these in turn on this blog. I’ll call them the new liberal heresy and the new conservative heresy, although, as we will see, neither of them is actually new. They are a rerun respectively of what Joseph Fletcher called ‘situation ethics’ and what Dietrich Bonhoeffer called ‘cheap grace’.