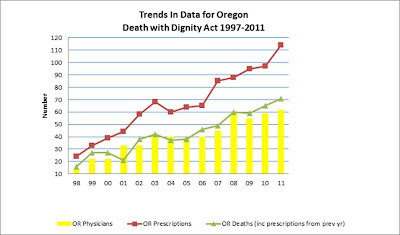 There has been a massive increase in cases of assisted suicide in both Oregon and Switzerland over recent years according to the latest figures.

The Oregon ‘Death with Dignity Act’ allows terminally-ill Oregonians ‘to end their lives through the voluntary self-administration of lethal medications, expressly prescribed by a physician for that purpose’.

It also requires the Oregon Health Authority to collect information about the patients and physicians who participate in the Act, and publish an annual statistical report.

The US state of Oregon legalised assisted suicide in 1997 following a referendum. Thus far over 100 attempts to get other US state parliaments to change their laws have failed and only the state of Washington has followed suit, again on the basis of a referendum.

These figures include only Swiss nationals and not the growing number of people from abroad who are making use of facilities like Dignitas.

The experience of both countries demonstrates that when assisted suicide is legalised there will inevitably be incremental extension.

The Oregon and Swiss numbers may not seem large to some but we need to remember that Oregon and Switzerland have small populations relative to the UK.

Back in 2006 the House of Lords calculated that with an Oregon-type law we would have about 650 cases of assisted suicide a year in Britain. But given the increase of numbers in Oregon the UK equivalent would now be well over 1,000. Currently assisted suicide is illegal here and we see only 15-20 Britons going to Dignitas in Switzerland to die each year.

However, later this year we will see renewed attempts to change the law in this country.

Margo Macdonald is planning to present a bill based on the Oregon model to the Scottish Parliament and the pressure group Dignity in Dying (formerly the Voluntary Euthanasia) is planning a mass lobby of the Westminster Parliament on 4 July in support of a new bill they plan to introduce by means of their parliamentary wing, the All Party Group on ‘Choice at the End of Life’.

We should learn from the Oregon and Swiss experience and be resisting these moves.

And once legalised there will inevitably be incremental extension as we have seen in Oregon and Switzerland. Legalisation leads to normalisation.