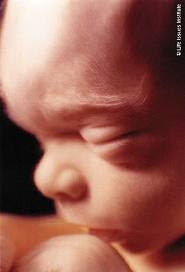 The Guardian newspaper, as a symptom of its rising anxiety about a change of public opinion about abortion, has run on its front page an emotive story titled ‘Anti-abortion climate “will deter new generation of doctors”’.

It quotes Dr Malcolm Griffiths, a consultant and clinical director in obstetrics and gynaecology at Luton and Dunstable hospital, as saying that ‘It's probably not a dozen people in the country who are doing (abortions) around 20 weeks and beyond.’

According to the Department of Health’s statistics, 2,744 abortions of the 189,574 abortions performed in England and Wales in 2010 were carried out at 20 weeks gestation or above (see table 7a).

So on Dr Griffiths reckoning, if twelve doctors are doing all of these late abortions then they must be doing an average of 153 each per year or three each every week!

The picture above is of a baby at 20 weeks gestation. Babies just three weeks older than this will not infrequently survive with neonatal intensive care and in fact I relate the remarkable story of one such baby on this blog.

24 weeks is generally regarded as the threshold of viability. It is also the gestation above which abortions cannot be performed other than for serious congenital abnormality.

Dr Griffiths says that so few doctors do late abortions because so few are trained to do it.

But I suspect that that is not the real reason at all. The real question is why more don’t seek such training.

I suggest the real reason more doctors don’t do late abortions is that there are very few doctors who can bring themselves to kill and then dismember what, for all intents and purposes, is quite obviously a baby.

I know one doctor who put her finger into the cervix to carry out a late abortion and felt the baby kick her. She froze and a colleague had to be called to ‘take over’.

Not surprisingly she never did another after that.
Posted by Peter Saunders at 15:35