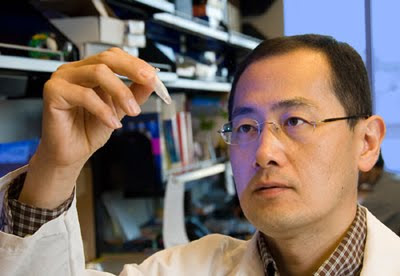 In so doing he laid the framework for an ethical alternative to using embryonic stem cells (which involve the destruction of an embryo) to provide treatments for conditions including diabetes, Parkinson’s disease, spinal injury and ischaemic heart disease.

Since his initial breakthrough in 2006 there have been progressive refinements of his technique (see here and here) and just last week, in a new breakthrough, a team at the University of Cambridge used cells from a patient's own blood (‘late outgrowth endothelial progenitor cells’) to make personalised stem cells from which they will be able to grow blood vessels. The first use will be to test drugs on those vessels.

This latest study was published in the journal Stem Cells: Translational Medicine.

Dr Amer Rana, leading the team, said this method was better than taking samples from skin or other tissues because of the relative ease of obtaining a blood sample.

The British Heart Foundation added that these cells had ‘great potential’ and The Medical Research Council talked of ‘rapid progress’ being made in the field.

Whilst therapies derived from iPS cells are still some way off, the advances have been so dramatic that a review by Matt Ridley in the Wall Street Journal this week concludes:

Ridley says that the chief medical ambition of those who study stem cells has always been that the cells would be used to repair and regenerate damaged tissue. But, he adds, there's another, less well known application of stem cells that is already delivering results: disease modeling.

It might soon be routine to test drug treatments on personalised tissue created from your own stem cells in order to work out which drugs might best benefit your condition.

Ridley reports of a study doing just this. A team at Johns Hopkins University and the Sloan-Kettering Institute for Cancer Research, using a version of Dr Yamanaka's technique, successfully grew nerve cells from a patient suffering from a rare disease called Riley-Day syndrome, which is linked to early mortality, seizures and other symptoms and caused by a fault in one gene.

The scientists then tested 6,912 chemical compounds on the cells to see if they could find one that ‘rescued’ the ‘expression’ of the gene: that is to say, caused it to produce the protein it is supposed to produce. One of the compounds worked, inducing the gene to be actively transcribed by the cell. Ridley concludes:

‘The hope is that in the not-very-distant future, when something is going wrong in one of your organs, one treatment may be to create some stem cells from your body in the laboratory, turn them into cells of that organ, or even rudimentary structures, and then subject them to experimental treatments to see if something cures the problem. The goal of personalized medicine, in other words, may be reached by stem-cell researchers before it's reached by geneticists.’

In a further development this week along the same lines ten international drug companies are to team up with scientists from 11 European countries to create a bank of stem cells for a project aimed at speeding up the development of new medicines.

‘StemBANCC, coordinated by Swiss drugmaker Roche and managed by scientists at Oxford University, aims to use human-induced pluripotent stem cells (iPS) derived from people with hard-to-treat conditions - as research tools.

Martin Graf from Roche, who is coordinating the project, said the goal was to generate 1,500 induced pluripotent stem cell lines derived from 500 patients that can then be used by researchers around the world to study a range of diseases, including diabetes and dementia.

Graf and Zameel Cader of Oxford University, who announced the project in London, said the raw material for the project would be largely skin and blood samples taken from patients with diseases such as Alzheimer's and diabetes.

One of Dr Yamanaka's original motivations when he set out to induce pluripotency in adult cells was to discover ethical avenues of research. He once said:‘I thought, we can't keep destroying embryos for our research. There must be another way.’

Even Julian Savulescu, the controversial and liberal bioethicist at Oxford University, recognises that Yamanaka has achieved great scientific advances within an ethical framework:

Perhaps the last word belongs to leading US stem cell scientist James Sherley: 'For those trained in the science, this is not news, but instead a completed fate that was known from the beginning' – a timely reminder that in good science the end does not justify the means (Romans 3:8).