‘He’s on His Way!’ – what Christmas is all about 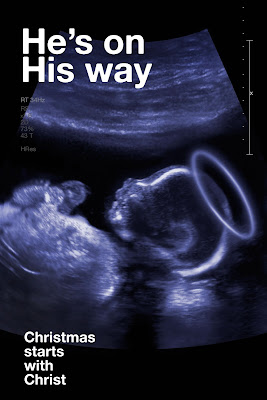 ‘He’s on His Way!’ The image of the ultrasound ‘Christ’ in his mother’s womb that was launched on thousands of billboards and other advertising venues in the UK and in other countries around the globe just two years ago, subtly showcases the fact that Jesus Christ was once an unborn child in need of protection to ensure his birth and ultimate mission in his life on earth.

John 1:14, puts this truth in the starkest possible terms. 'The Word became flesh and made his dwelling among us. We have seen his glory, the glory of the One and Only, who came from the Father, full of grace and truth'

Jesus the Son of God, the Word who was God (John 1:1), who was with God (1:2) and who created the world (1:3), literally put on human flesh, and took on our human existence in all its frailty.

Jesus was an unborn baby, confined by the boundaries of the womb, going through the trauma of a normal birth, needing to be wrapped up. As the writer of Hebrews tells us he was made like us in every respect (2:17).

So what does the incarnation mean for us personally?

First, it reminds us that Jesus understands us. He knows what it is like to be a human being. He knows hunger and thirst, pain and sorrow. He knows bereavement and loss. He knows rejection and betrayal. As Hebrews tells us he can sympathise with our weaknesses because he has been tempted in every way as we are, and much more (4:15).

Second, it reminds us that Jesus can help us. Again the writer of Hebrews tells us, 'Because he has suffered and been tempted he is able to help those who are tempted' (2:18). What are our areas of weakness? What do we despair over? What is it that is stopping us growing as Christians? What is it we are fighting that perhaps no-one else sees or knows about? He is able to help us.

Third, the incarnation is a model for us in our own Christian lives. We are called to follow in Jesus’ footsteps. The cross is the means by which God put us right with him, but it also a pattern to follow. We too are to carry the cross, to take our share of suffering, to bear the burdens of others.

Fourth, the incarnation helps us in our evangelism. It challenges us to cross social barriers as Jesus did, to make ourselves accessible and vulnerable, in the way that Jesus was, to be, in the words of Paul, 'all things to all men'.

But finally, and most importantly the incarnation reminds us of why Jesus came, because Christmas is the prelude to Easter. The same Jesus who grew in the womb and lay in the manger was sent to die on a cross and rise from the dead in order to reconcile us to God.

‘Christmas Starts With Christ’. ‘He’s on His Way’. Let’s keep Jesus’ birth and all that means at the centre this Christmas.