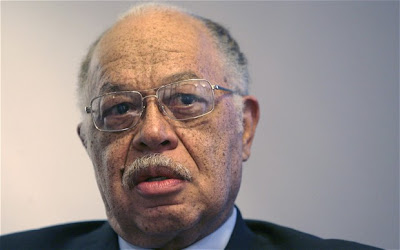 The Daily Telegraph (see here and here) has this week run the story of a US abortionist who is facing a potential death sentence after being charged with the gruesome murders of seven babies and a mother.

Dr Kermit Gosnell (pictured), who is on trial in Philadelphia, Pennsylvania, allegedly ran a filthy and dangerous ‘abortion mill’ from his clinic, where he terminated pregnancies after the state's 24-week legal limit.

24 weeks is the age beyond which babies will generally survive in a neonatal unit although babies born as young as 22 weeks have been known to survive in exceptional circumstances.

The Telegraph reports it as follows:

The 72-year-old doctor is accused in a graphic 281-page grand jury report of forcing vulnerable women to give birth to live foetuses, which he and his colleagues killed using a method they called ‘snipping’.

‘He regularly and illegally delivered live, viable babies in the third trimester of pregnancy - and then murdered these newborns by severing their spinal cords with scissors,’ the grand jury states.

Dr Gosnell is charged with eight counts of murder. His case has generated widespread revulsion and rekindled the emotive and politically-charged debate over access to abortion across America.

Prosecutors allege that Dr Gosnell's legitimate-sounding Women's Medical Society was in fact a ‘baby charnel house’ in which foetal remains were left scattered around in freezers, bags and jars.

An unlicensed medical school graduate delivered graphic testimony about the chaos at the clinic where he helped perform the late-term abortions.

Stephen Massof described how he snipped the spinal cords of babies, calling it, ‘literally a beheading. It is separating the brain from the body’.

He testified that at times, when women were given medicine to speed up their deliveries, ‘it would rain fetuses. Fetuses and blood all over the place.’

According to the Atlantic, the story has been played down in the American media – possibly because the allegations of a homicidal abortion doctor don't fit into their pro-choice narrative (more on this here, here,  here, here and here)

There was also evidence of a cover up suggesting that there may have been many other cases – from the Telegraph:

While records for most of these are said to have been destroyed, Dr Gosnell has been charged with seven counts of first-degree murder in cases where investigators discovered documentary evidence.

One, ‘Baby A’, weighed about six pounds and was breathing and moving after his 17-year-old mother gave birth, prosecutors say. Joking that the baby was big enough to ‘walk me to the bus stop,’ Dr Gosnell allegedly disposed of his body in a shoebox.

Dr Gosnell is also charged with the third-degree murder of Karnamaya Mongar, a 41-year-old refugee from Nepal, who died after being sedated.

Prosecutors claim that before paramedics arrived, her body was rearranged to appear as though she had been undergoing a ‘routine, safe abortion procedure’.

The clinic was raided by the FBI in February 2010 and Dr Gosnell's medical licence was suspended.

Two academic bioethicists stirred up huge controversy a year ago by saying that infanticide was ethically equivalent to abortion.

Their point was that if we can justifiably abort babies beyond 24 weeks, then it must be equally justifiable to kill them after birth at the same (or possibly even younger) age.

Their logic is difficult to fault.

But if people are shocked by infanticide– and I hope that most are especially after reading a story like this – then they should surely be equally questioning late abortion.

No wonder that sections of the American media were reluctant to run the story.

I wonder how much of the British media will touch it.

PS. Finally, on 16 April there is massive media coverage on both sides of the Atlantic after the BBC covered it on 15 April..
Posted by Peter Saunders at 12:20