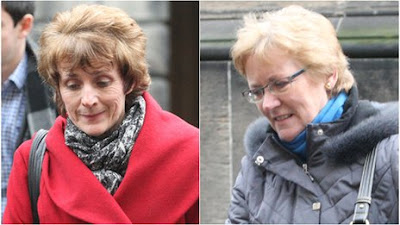 Mary Doogan, 58, and Concepta Wood, 52, (pictured) lost a previous case against NHS Greater Glasgow and Clyde (GGC) when the court ruled that their human rights had not been violated as they were not directly involved in terminations.

However appeal judges have now ruled their right to conscientious objection means they can refuse to delegate, supervise or support staff involved in abortions.

The Guardian, BBC and Scottish TV have all reported on today’s ruling and I have previously blogged more extensively on the case here and here. The midwives have understandably welcomed today’s verdict.

The judgment is hugely significant and means that official guidance from both the Royal College of Midwives (RCM) and the General Medical Council (GMC) will almost certainly now need revision.

But Lady Dorrian, who heard the challenge with Lord Mackay of Drumadoon and Lord McEwan, said: ‘In our view the right of conscientious objection extends not only to the actual medical or surgical termination but to the whole process of treatment given for that purpose.’

Lady Dorrian added: ‘It is in keeping with the reason for the exemption that the wide interpretation which we favour should be given to it. It is consistent with the reasoning which allowed such an objection in the first place that it should extend to any involvement in the process of treatment, the object of which is to terminate a pregnancy.’

If this latest ruling is not overturned by a higher court (and it is not yet clear if an appeal will be made by the Greater Glasgow and Clyde Health Board) then the current RCM guidance will almost certainly need to be revised. It currently reads as follows:

In addition, the latest GMC guidance, which ironically came into force only two days ago, will similarly need to be rewritten. It currently reads:

As Neil Addison points out in para 33 of the Judgment the court makes clear that professional guidelines can be legally wrong and cannot overrule statute, it says:

Because this Judgment is from a Scottish Court (and Scotland is a different jurisdiction to England and Wales) it is not strictly binding on an English Court. However it will nonetheless have significant persuasive force in England. The Abortion Act 1967 applies in England, Wales and Scotland (but not in Northern Ireland) and when Scottish Courts have adjudicated on such ‘cross border’ legislation in the past their decisions have been taken very seriously in England and Wales and vice versa.

I have previously argued that the GMC was over-interpreting the law in a grey area in issuing its guidance. But this latest judgement clarifies the law in a way that now makes that virtually certain.

I trust that the RCM and GMC will move swiftly to review and revise their guidance so that midwives and doctors with a conscientious objection to abortion are clear where they now stand.
Posted by Peter Saunders at 14:25