Margaret Thatcher recognises the wisdom and goodness of Jesus Christ 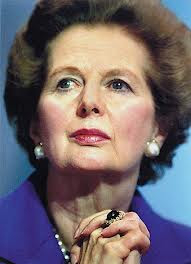 Whatever one’s final verdict on Margaret Thatcher, even her harshest critics have conceded that she was at heart a ‘conviction politician’ who was driven by ideology and not swayed by public opinion.

One of her most famous quotes was that given to Conservatives at the party conference in Brighton in 1980 and underlining her determination to stick to tough economic policies:

‘To those waiting with bated breath for that favourite media catchphrase, the U-turn, I have only one thing to say: You turn if you want to. The lady's not for turning!’

In like manner Sir Malcolm Rifkind recalled this week a time when she was asked ‘Do you believe in consensus?’ and replied:

‘Yes, I do believe in consensus: There should be a consensus behind my convictions.’ 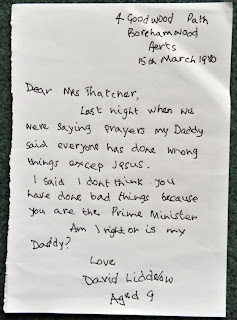 However a touching letter she wrote to a schoolboy published this week in the Express and Daily Mail reveals that she felt she lived in the shadow of at least one person.

On 15 March, 1980, in the same year as Thatcher’s Brighton speech above, David Liddelow, the young son of a vicar, wrote to her, posing her a challenging question. The youngster, from Borehamwood, Herts, asked:

‘Last night when we were saying prayers my Daddy said everyone has done wrong things except Jesus. I said I don’t think you have done bad things because you are the Prime Minister. Am I right or is my Daddy?’

A few weeks later, David and his father, received a handwritten reply in fountain pen: 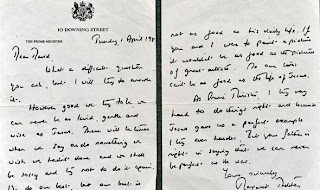 In a touching and candid final paragraph, Mrs Thatcher added:

‘As Prime Minister, I try very hard to do things right and because Jesus gave us a perfect example I try even harder. But your father is right in saying that we can never be as perfect as He was.’

Jesus himself was once called good by someone asking him a similarly tricky question and gave a surprising reply:

The text is often misunderstood as implying that Jesus was denying his divinity, but as described in more detail here, he was actually doing the very opposite.

Jesus’ question to the man was designed not to deny His deity, but rather to draw the man to recognize Christ’s divine identity.

Such an interpretation is substantiated by passages such as John 10:11 wherein Jesus declares Himself to be ‘the good shepherd’. Similarly in John 8:46, Jesus asks, ‘Can any of you prove me guilty of sin?’

The logic can thus be summarised as follows:

Such a claim makes perfect sense in light of the flow of Mark’s narrative with regards to the unfolding revelation of Jesus’ real identity. It is only before the high priest in Mark 14:62 when the question of Jesus’ identity is explicitly clarified.

I am not sure whether Margaret Thatcher followed the logic through to this conclusion, but she had certainly taken a step onto the first rung by recognising the goodness of Jesus.

Is Jesus the only way to God?
Why did Jesus have to die?
The queen once again points her subjects to Jesus Christ