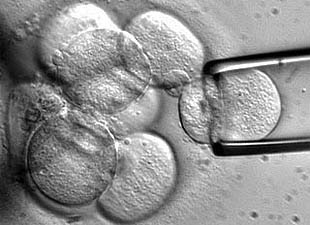 The Daily Telegraph this weekend reports on a new expert study which has raised fears that some clinics may be offering techniques that put the embryo at risk for their own profit.

The review, carried out by Dr Justin McCracken, the former head of the Health Protection Agency, highlighted a new technique, known as Pre-Implantation Genetic Screening (PGS), as one which is possibly being offered inappropriately for commercial reasons.

For a fee, which can run into thousands of pounds, clinics can check embryos created by a successful IVF cycle for certain genetic abnormalities and only implant those that appear normal.

The process is becoming especially popular for older couples seeking IVF, because embryos created from their sperm and eggs have a higher chance of abnormalities. As it involves the removal of a cell from an embryo (see picture) it carries some risk for the embryo being tested.

Dr McCracken said the jury was still out on whether PGS improves the chances of having a baby and warned there is a risk of harm to the foetus. He said it was vital that the regulator checks that clinics are not simply recommending it to boost profits.

‘I understand that there is no clinical consensus regarding its efficacy, but there is a real risk to the embryo in carrying it out.’ (emphasis mine)

This is a somewhat curious statement. Dr McCracken seems (appropriately) concerned about the risk of damage to a few hundred embryos each year undergoing PGS.

But he is curiously silent (or perhaps unaware) that over three million embryos have perished or been deliberately destroyed since 1990 as a result of procedures made legal by the Human Fertilisation and Embryology Act.

Liberal Democrat Peer Lord Alton recently asked in parliament how many embryos have been created in each year since the commencement of the Human Fertilisation and Embryology Act 1990, and how many of these have resulted in live births.

Figures given in reply by the Under-Secretary of State at the Department of Health Earl Howe showed that 3,806,699 embryos have been created since 1990. Between 1992 and 2006 a total of 122,043 live births occurred according to figures from the HFEA given alongside his reply (see also here).

These figures make McCracken’s concern about PGS embryos alone look like what Jesus called ‘straining a gnat whilst swallowing a camel’ (Matthew 23:23-24).

In a letter to the Telegraph, as yet unpublished, disability rights advocate Ann Farmer has highlighted the fact that, in addition to the vast wastage of embryos, some women have also died from complications of infertility treatments such as OHSS. She comments:

‘The whole point of the infertility industry is to manufacture babies out of embryos… A car factory that managed to accumulate 3,684,656 surplus models between 1990 and 2012 and in addition killed some of its customers would surely have gone out of business long ago.’

In 1948 the World Medical Association adopted the Declaration of Geneva which included the affirmation, ‘I will maintain the utmost respect for human life from the time of conception, even against threat’.

If you agree with today’s doctors that early human life can be treated as a disposable commodity then the figures that Lord Alton has uncovered (not much short of the current population of New Zealand!) will probably not bother you much at all.

But if, like me, you believe that they are special creations made in God’s image, which should be granted respect, wonder, empathy and protection you will no doubt be very concerned indeed.


See also ‘The moral status of the embryo. When is a person?’
Posted by Peter Saunders at 10:46