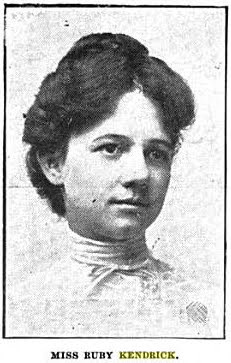 In Yanghwajin Foreigners’ Cemetery in Seoul are 145 graves belonging to Christian missionaries and their families who dedicated their lives to Korea during the late 19th and early 20th centuries.

These missionaries profoundly influenced Korean society, not only by establishing hospitals and schools, but by being God’s agents in far-reaching spiritual revival which transformed the soul of the nation, abolished class hierarchy and laid the framework for remarkable cultural and economic development.

Typifying their spirit was Ruby Kendrick (pictured), a Texan nurse who died only months after arriving in Korea in 1908 aged only 25. Her words, ‘If I had a thousand lives Korea should have them all’, have inspired literally thousands of Korean Christians since to leave home and country and serve abroad in Christ’s name. 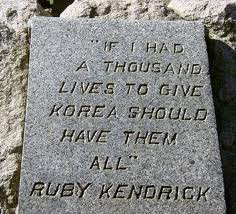 It was a good opportunity to learn some of the history behind Korea’s explosive Christian growth first hand.

During the reign of the Joseon Dynasty from AD 792 to 1910, Confucianism was Korea’s official state religion and suppressed all other ideologies, principally Buddhism.

Catholicism was introduced briefly in the 17th century but was effectively wiped out after a wave of persecution.

When it was reintroduced by Yi Seung-hun in 1785 further persecution followed and many were martyred, especially during the Catholic Persecution of 1801.

The Joseon Dynasty saw Christianity as a subversive influence and in the later Catholic Persecution of 1866, 8,000 Catholics across the country were killed, including nine French missionaries.

But the opening of Korea to the outside world in the following decades brought religious toleration for the remaining Catholics and also introduced Protestantism.

The first Presbyterian missionary in Korea, Horace Newton Allen, arrived in 1884 and remained in Korea until 1890, by which time he had been joined by many others.

Within twenty years of the arrival of the first resident Protestant missionary, early stirrings of a great revival began to sweep through the staid Presbyterian and Methodist beginnings of missionary effort.

The climax came in 1907 with ‘extraordinary manifestations of power’, that reminded observers of the revivals of John Wesley. Church membership leapt upward, quadrupling in the five years between 1903 and 1908.

In spite of this early spurt the subsequent growth of both Catholicism and Protestantism was gradual during the period of Japanese occupation (1910-1945). By 1945 approximately 2% of the population was Christian.

One of the most important factors leading to widespread acceptance of Christianity in Korea was the identification that many Christians forged with the cause of Korean nationalism during  this period.

Following the Korean War (1950-1953), when the North and South were divided, rapid growth ensued.

Prior to the Korean War two-thirds of Korean Christians lived in the North, but most later fled to the South.

According to ‘Operation World’, there were 11.8 million members of over 67,000 Christian congregations by 2010, accounting for almost 25% of South Korea’s 48 million population.

Today South Korea ranks 7th in the world with respect to numbers of Christians in the country. In addition, over 21,000 Korean missionaries serve in 175 countries, making South Korea second only to the US as a missionary sending nation.

South Korean missionaries are especially prevalent in 10/40 Window nations that are hostile to Westerners.

The cultural influence of this explosive growth has been immense. Christians have started 293 schools and 40 universities including three of the top five academic institutions. 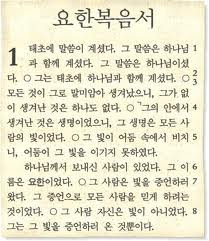 Christian literature printed for use in Korea, including that used by the network of schools established by Christian missionaries, mostly used the Korean language and the easily learned Hangul script (see left).

This combination of factors resulted in a rise in the overall literacy rate, and a sharp rise in female literacy.

Many Korean Christians believe that their values have had a positive effect on various social relationships.

Traditional Korean society was hierarchically arranged according to Confucian principles under the semi-divine emperor. Women had no social rights, children were totally subservient to their parents, and individuals had no rights except as defined by the overall social system.

This structure was challenged by the Christian teaching that all human beings are created in the image of God and thus that every one of them is equal and has essential worth.

Many South Korean Christians also view their faith as a key factor in the country's dramatic economic growth over the past three decades, believing that its success and prosperity are indications of God's blessing and the product of a strong protestant work ethic.

This economic growth however has also brought the challenges of materialism and spiritual pride.

According to ‘Operation World’ the church has also struggled at times with authoritarian leadership, divisions, schisms and structures that are not always conducive to effective discipleship.

But in spite of these difficulties, South Korea has rapidly becoming one the greatest power houses of Christianity in the world today.

In this 21st century, the Asian century, the explosive growth of Christian believers in South Korea will be a major influence and key ingredient in world mission as Jesus Christ continues to build his church in the decades to come.

And the Korean church, built through the sacrifices made by those early missionaries, will continue to be an inspiration and challenge to Christians worldwide who desire to see God's Kingdom grow.