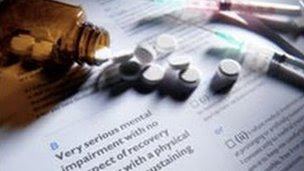 A 65-year-old woman and her son from the Chichester area have been arrested after police suspected they were planning to take her husband to the Dignitas clinic in Switzerland to commit suicide, sources said.
The pensioner and the 25-year-old were held on suspicion of encouraging or assisting a suicide.

Details about the condition of the 71-year-old man have not been disclosed and none of the family have been named by Sussex Police.

But the force confirmed that officers were having the mental capacity of the ‘vulnerable’ man assessed to determine how able he is to make decisions for himself.

There have been suggestions that the man was in the early stages of dementia, something which - according to Dignitas’ own guidelines - would require an assessment by a psychiatrist of the patient’s mental capacity to make the decision to end their life and has led to the pair’s motives being questioned.  There has only been one previous case of a British person with dementia travelling to Switzerland to end their life, in May 2013.

Both the woman and her son have been freed on police bail until October 8 following their arrest on August 8.

It is an offence to encourage or assist suicide under the Suicide Act 1961 (as amended by the Coroners and Justice Act 2009) with the offence carrying a prison sentence of up to 14 years.

However prosecutions can only proceed on the authority of the Director of Public Prosecutions (DPP) who has to decide, on the basis of a police investigation, whether there is enough evidence to bring a successful prosecution and whether it is in the public interest to proceed.

In order to decide on the latter the DPP brings his 22 prosecution criteria into play. These were established in 2010 following a public consultation in the wake of the Debbie Purdy case.

In practice, when assistance of a suicide is judged to be ‘wholly motivated by compassion’ a prosecution is unlikely. He decision in this particular case will depend on how he weighs up the facts against his prosecution criteria.

A number of public figures – including euthanasia campaigner Michael Irwin, TV star Melvyn Bragg and novelist Terry Pratchett – have controversially spoken in support for a change in law to allow those with early dementia to kill themselves.

This latest case may fuel further calls for a change in the law so it is worth reminding ourselves why the law is as it is and why it does not need changing.

Euthanasia (being killed by a doctor) and assisted suicide (being helped to kill oneself) are illegal for good reason.

The first duty of Parliament is to protect its citizens and British parliaments have rejected decriminalisation three times since 2006 by large majorities on public safety grounds – in the House of Lords in 2006 and 2009 (by 148-100 and 194-141 respectively) and in the Scottish Parliament in 2010 (by 85-16).

The vast majority of UK doctors remain opposed to legalisation along with the British Medical Association, the Royal College of Physicians, the Association for Palliative Medicine and the British Geriatric Society.

Similarly all major disability rights groups in Britain have resisted any change in the law believing it will lead to increased discrimination towards them and increased pressure ‘to seek help to die’.

Any change in the law to allow assisted suicide or euthanasia would place subtle pressure on vulnerable people to end their lives, for fear of being a financial, emotional or care burden upon others. Those who are disabled, elderly, sick or depressed would be particularly at risk. The right to die, in other words, can so easily become the duty to die.

Elder abuse and neglect by families, carers and institutions is real and dangerous and a law allowing the active ending of life in limited circumstances could be so easily exploited and abused. This is why strong laws are necessary.

Developments overseas are disturbing. Assisted suicides have increased 450% in the US state of Oregon and 700% in Switzerland in the last fifteen years and in the Netherlands the number of euthanasia cases has almost doubled since 2006 from 1,923 to 3,695 with increases of 15-20% each year.

In the Netherlands one in eight deaths is due to ‘deep continuous sedation’, dementia patients are euthanised, mobile euthanasia clinics operate and the ‘Groningen protocol’ allows euthanasia for disabled babies.  In Belgium organs are harvested from euthanasia patients and 32% of all euthanasia deaths are ‘without consent’.

Once a ‘right’ to assisted suicide or euthanasia is established for restricted groups there will be inevitable incremental extension to others through the application of case law in ‘hard cases’.

Our current law with its blanket ban does not need changing. The penalties it holds in reserve act as a strong deterrent to those who stand to gain from another person’s death. It also gives discretion to prosecutors and judges to apply mercy in genuinely hard cases.

It also works. The number of Britons travelling abroad to commit assisted suicide has been very small (about 200 in ten years). But according to a House of Lords enquiry, with an ‘Oregon’ law we would have 1,200 deaths a year and with a ‘Dutch’ law 13,000.

Persistent requests for euthanasia are extremely rare if people are properly cared for. Our priority must be to make good care – killing pain without killing the patient - accessible to all. This is the best way of safeguarding vulnerable people and addressing patients’ physical, psychological, social and spiritual needs.