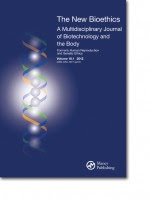 A new journal in the rapidly expanding field of bioethics has been launched this week.

The New Bioethics seeks to reclaim bioethics as a diverse and multidisciplinary project. It provides a space for dialogue between different perspectives on biotechnology and offers the chance to find new kinds of common ground.

The journal is not concerned primarily with the traditional professional ethics of doctors such as confidentiality and data protection, but will focus specifically on the interface of technology and the human body.

It covers issues such as assisted reproduction, genetics, regenerative medicine (including the use of stem cells), cognitive enhancement and those technologies that have allowed human tissue to be taken, stored, manipulated and used for biomedical purposes.

The new journal is the successor to Human Reproduction and Genetic Ethics (HRGE).There will be two issues per year.

This first edition contains nine articles two of which, the editorial by Trevor Stammers and Matt James, and a guest editorial by Aaron Parkhurst are available free on line.

‘We hope that these papers will not only engage and interest the readers of the parent journal but also attract an even wider readership as we maintain our emphasis on a wide multidisciplinary approach but expand the range of bioethical areas under discussion.’

As Aaron Parkhurst explains, most of the nine papers from the first edition come from a one-day conference ‘The 21st Century Body’.

I note that some of the contributors, and both editors, are committed Christians who are also academics in bioethics.

I wish them well and look forward to the new journal’s contributions to vital debates on new biotechnologies.
Posted by Peter Saunders at 04:05