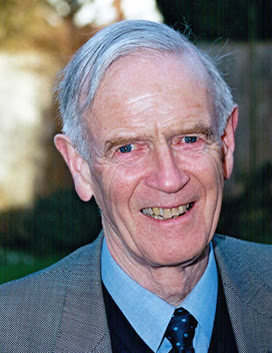 Oliver Barclay, the second General Secretary of what is now known as the Universities and Colleges Christian Fellowship (UCCF), was promoted to glory this week.

Christian Medical Fellowship (CMF), for which I work, grew out of IVF/UCCF in 1949 and was founded by Oliver’s immediate predecessor Douglas Johnson (DJ), who features in this obituary abridged from the UCCF website.

Both Oliver and Douglas made an immense contribution to the growth of evangelical Christianity worldwide.

Oliver Barclay, a scion of the banking family and second General Secretary of IVF/UCCF, died at his home in Leicester yesterday, 12 September 2013, aged 94.

He was born in Kobe, Japan, on 22 February 1919, the son of Joseph Gurney Barclay (who served with what is now the Church Mission Society). His great grandfather was the MP Thomas Fowell Buxton who campaigned with William Wilberforce as part of the influential Clapham Sect.

Oliver first joined the small IVF team in 1945, having completed a doctorate in zoology.  His original hope was to teach in one of China’s newer universities, but Douglas Johnson, IVF founding General Secretary (always known as DJ), persuaded him to defer his departure by two years. It soon became clear that the universities of Britain and Ireland would instead be his life’s work.

Oliver Barclay served for two years as a wartime President of the Cambridge Inter-Collegiate Christian Union (CICCU) and as Chairman of the students’ national IVF Executive Committee.  From his days in Trinity College, Cambridge, he formed a lifelong friendship with John Stott, also at Trinity, and two years his junior. Both men would serve as lifetime Honorary Vice-Presidents of the CICCU.

As Chair of the student national IVF Executive, Oliver was privy to DJ’s plans that the IVF should found a Centre for Biblical Research in a university town, to strengthen the roots of the church in the then very liberal Theology faculties of the universities. What would soon become Tyndale House, Cambridge (secured in 1944 and opened in 1945) had originally belonged to a member of the Barclay family. It now hosts one of the finest libraries for biblical research in the world.

In 1953, Oliver became the first IVF Universities Secretary, supporting the IVF travelling secretaries [now UCCF staff workers] around the four nations. The liberal hold in the university theology faculties, and in the churches, created much opposition to evangelical influences among students.

In 1964 Oliver Barclay succeeded Douglas Johnson as IVF General Secretary. This was the same year his first wife, Dorothy, a consultant surgeon at the Royal Free Hospital (whom he had married in 1949) died of cancer, leaving four children. The following year, Oliver married Daisy Hickey, a family friend.

Oliver Barclay steered the Inter-Varsity Fellowship through its own significant expansion to engage with the times, as new universities and colleges were founded, and as a surge of change swept through societal norms.  In 1975 the movement’s name was changed to the Universities and Colleges Christian Fellowship (UCCF) to reflect the growing work in the polytechnics and colleges of education. Its publishing wing, by then known as Inter-Varsity Press (IVP), was the UK’s leading evangelical publishing house.

Oliver Barclay urged clear-thinking evangelical graduates to consider two major directions: to pursue an academic career; or if ordained to apply for vacant churches in university towns.  Gradually the tide of liberalism began to turn. Oliver was succeeded in 1980 by Robin Wells under whom from the mid-late 1980s the regional teams would be formed, opening the way for the appointment, under Bob Horn’s leadership, of the first relay workers.

In retirement, Dr Barclay continued to serve on the IVP long-range planning group, and was instrumental in the founding of the UCCF Research Council to oversee the work of Tyndale House in Cambridge and the new Whitefield Institute in Oxford. He was co-founder in 1989 of the journal Science and Christian Belief, joint organ of the Victoria Institute and of Christians in Science.

Oliver served on the Executive Committee of the International Fellowship of Evangelical Students (IFES) from 1959-1983, and as its chair from 1971-79. He served as an Honorary Vice-President from 1983-91, and was always particularly thrilled to see its pioneering work pass into the hands of national leaders. This global movement now has presence in over 150 nations.

Oliver Barclay wrote several books including Evangelicalism in Britain 1935-1995 (IVP, 1997) and in the 1980s he edited a book series entitled When Christians Disagree. He had no formal theological training but developed in himself – and cultivated in his staff – the ability to ‘think theologically’. He read through Calvin’s Institutes each year and prayed daily for a deeper understanding of the meaning of the death of Christ. He never lost sight of his dual task, to strengthen a witness to Christ both in the student world and among faculty.

We thank God for Oliver Barclay’s tenacity and far-sightedness, his shrewd judgment and his passion for the gospel; and we commend his widow Daisy and his four children to your prayers.
Posted by Peter Saunders at 13:17