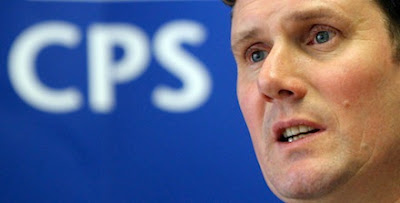 It has not been an easy two weeks for Keir Starmer (pictured), the Director of Public Prosecutions (DPP).

When it emerged on 4 September that the Crown Prosecution Service, which he heads, would not be bringing charges against two doctors who had been caught authorising abortions purely on grounds of gender, the outrage was immediate.

Within hours the Health Secretary Jeremy Hunt said that sex selection abortions were ‘completely unacceptable’ and called for the Attorney General Dominic Grieve to seek an ‘urgent clarification’ about the decision.

The following day Lord Macdonald, the former DPP, described the decision as ‘very dubious’ and amounted to letting doctors ‘avoid criminal action’ because of their professional status - undermining the basic principle that ‘everyone is equal under the law’.

The CPS then made the situation worse by arguing that it was down to doctors to ‘interpret the law’ and that they had ‘wide discretion’ to assess whether a termination is legal or not. Although there was enough evidence to bring a prosecution it was not in the public interest to do so, they claimed. The matter was more appropriately a matter for the General Medical Council (GMC).

This led the GMC to distance itself from the CPS’s decision, insisting that, as a professional regulator, it should not be seen as a ‘substitute’ for the criminal justice system and is not there to ‘punish doctors’.

Emily Thornberry, Labour shadow attorney general, then wrote to the DPP to request an urgent review of the decision. She cut right to the heart of the issues at stake (full text here):

‘The GMC is a regulator and cannot bring criminal proceedings. The provisions of the Abortion Act 1967 are crystal clear. The conduct of abortions for reasons not stated in that Act is a criminal offence, not just a regulatory one. To decide not prosecute because a regulator can hear the matter instead is to disapply the law and undermine the will of Parliament.’

David Burrowes, a Tory member of the all-party parliamentary Pro-Life Group, then raised the issue in the Commons. He said: ‘There is urgent need for a statement to clarify whether the restrictions on choice in the Abortion Act are now meaningless.’

This led to the Prime Minister expressing concern in response to a parliamentary question from Tory MP Nadine Dorries.

Mr Cameron praised The Daily Telegraph for highlighting ‘this important case’ and said it was ‘absolutely right’ that the doctors could face ‘professional’ consequences.

This weekend 50 MPs supported the Health Secretary’s call for the matter to be urgently investigated.

In a letter to the Daily Telegraph they called the decision a ‘step back in the fight for gender equality’ and accused the DPP of usurping parliament’s role:

‘The decision by the CPS could lead to the conclusion that gender-specific abortion is merely a matter of professional misconduct rather than illegal. This is clearly unconstitutional as it is for Parliament to legislate to change the law, and it has occurred without recourse to Parliament. Safeguards in the 1967 Abortion Act need to be properly applied and enforced. Doctors are not above the law and the General Medical Council cannot be a substitute for the courts.’

Other critics have accused the DPP of ‘double standards’ over abortion laws and operating a policy ‘worthy of Alice in Wonderland’.

Last Friday the Christian Legal Centre said it was preparing for a private prosecution against the two doctors.

‘We are preparing for a private prosecution or judicial review, but we may do both,’ said chief executive Andrea Williams. ‘We will not let the matter go.’

I was asked to comment and said to the Telegraph that if the CPS won’t do its job then concerned citizens will step in. The CPS was giving the message that people wanting sex-selective abortions should come to Britain and that if the law is not upheld it will be increasingly flouted by unscrupulous people.

By failing to act the DPP has signalled that Britain is open for business as far as sex selection abortions are concerned.

I can’t ever recall any issue related to abortion uniting those across the political spectrum in the way this has done. It has brought prolife activists and prochoice feminist factions together in an extraordinary way resulting in Keir Starmer attracting the wrath of all sides.


Now all the heat is on the DPP to explain fully why he has not upheld the will of parliament. We are all waiting.
Posted by Peter Saunders at 00:48