Praying for Christians in Syria is not enough 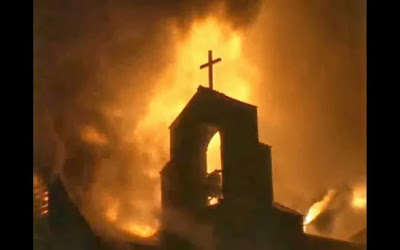 We have all been deeply moved to hear about the desperate plight of Christians in Syria who have been targeted by radical Islamic groups during the civil war.

But recent weeks and days have brought powerfully home to us that Christians throughout the whole of the Islamic world are facing great danger from those who would like to see their communities eradicated: scores of churches in Egypt torched and burned, 78 killed outside a church in Pakistan, Kenyan Christians gunned down in Westgate shopping centre by Al Shabab for not reciting the ‘Shahada’ and now 40 students shot dead whilst they slept in Northern Nigeria by the terrorist group Boko Haram.

These Christians are the tip of a much larger iceberg of those who have fled their homes, lost children, parents and family members or are without food, shelter or clothing. Many are included amongst over a million children who have fled fighting in Syria. Now they are hungry, homeless and fearful.

In the first century the Apostle Paul organised a collection for the poor in Jerusalem to which Christians from all over the Roman world contributed (2 Corinthians 8 & 9). He emphasised his concern for the poor (Galatians 2:10) and said that Christians should ‘do good to all people, especially to those who belong to the family of believers’ (Galatians 6:2, 10).

Jesus, in the parable of the sheep and the goats, said that we way we treat our brothers and sisters who are hungry, thirsty, naked or without shelter is actually the way we treat him (Matthew 25:31-46).

His parable of the Good Samaritan challenges us to be neighbours to all those in need, regardless of nationality or culture (Luke 10:25-37).

James said that true religion involves caring for widows and orphans in their distress (James 1:27) and that faith without care for the physical needs of others is dead (James 2:14-17).

‘This is how we know what love is: Jesus Christ laid down his life for us. And we ought to lay down our lives for our brothers and sisters.  If anyone has material possessions and sees a brother or sister in need but has no pity on them, how can the love of God be in that person? ‘
(1 John 3:16,17)

Not many of us will have the skills or openings to go to help and in most cases it will be best to leave it to those experts already on the ground. But in the 21st century it is now very easy to give to provide food, clothing, shelter, medical care and other necessities.

Aid agencies like Save the Children, UNICEF, Red Cross, Christian Aid and Oxfam are already doing a lot to support refugees.

But there are also many Christian Missions who are specifically reaching and supporting Christian believers. I have listed and linked some of them below. As John exhorts us, ‘let us not love with words or speech but with actions and in truth’ (1 John 3:18).

Email ThisBlogThis!Share to TwitterShare to FacebookShare to Pinterest
Labels: Syria