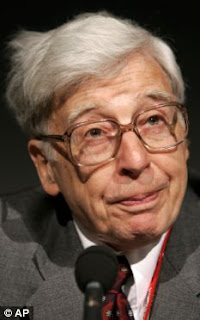 The decision to award the Nobel prize in medicine to Robert Edwards(pictured), the British scientist who developed IVF, has met with a mixed reaction. On the one hand there have been 4 million babies born to couples who would not otherwise have been able to conceive. On the other IVF has opened what many regard as a Pandora ’s Box of genetic engineering, cloning, pre-implantation diagnosis, embryonic stem cell harvest and animal-human hybrids.

I’m not intending to comment on the appropriateness of Dr Edward’s award or weigh the perceived benefits of his research against its downside but rather to use the occasion for some brief Christian reflections on infertility treatments.

There are over two million infertile couples in the UK (one in eight). Infertility can result from defects in the production, release or transport of egg or sperm and successful treatment depends on accurate diagnosis. The range of treatments and their speed of development is bewildering, and not all couples need IVF: other common treatments include artificial insemination (AI), intracytoplasmic sperm injection (ICSI) and gamete intra-fallopian transfer (GIFT).

In IVF (in vitro fertilisation), sperm and eggs are brought together in a petri dish, and resulting embryos are then transferred into the womb. There is a high failure rate (75-85% per cycle) and the treatment costs of £2,500 per cycle will exhaust the resources of many of the couples who are unable to get NHS treatment. The emotional roller coaster of raised hope and dashed expectation is another important cost to be counted; but I believe the most important decisions Christians need to make involve honouring embryonic life and upholding the marriage bond. We should not seek a child at any cost (Romans 3:8).

Some IVF programmes involve the production of spare embryos, which are then used for research, disposed of, or frozen for future use. Freezing compromises embryo survival and there is a high chance that frozen embryos will never be used. Other programmes involve screening out embryos or fetuses with congenital disease either before implantation or later in pregnancy. Our society thinks that because human embryos are small, weak and physically insignificant they are expendable. But this is at odds with the God’s loving grace, which sees even the weakest of human beings as precious, and worthy of wonder, love, respect and protection.

The other key question to consider is whether the use of donated eggs or sperm somehow violates the marriage relationship. Clearly using donor gametes does not involve sex outside marriage nor the cheating nor lust aspects of an adulterous relationship. But marriage is a spiritual, emotional and physical union in which two become one and donor eggs or sperm inevitably introduce a third person that will be genetically related to the child, but play no part in their upbringing. And the child will be biologically related only to one, or perhaps neither of his or her parents.

So my own guidance is that prospective parents considering IVF should carefully count the economic and emotional cost and seek treatments that both respect the human embryo and also honour the marriage bond.

Some infertile Christian couples will go on to conceive, either naturally or with ethical infertility treatment, after a period of waiting. But this does not happen for all, and God in his wisdom has left some couples childless despite good treatment and patient prayer. Perhaps this is to ensure that there are couples with a strong desire to be parents, who can either adopt children, serve others’ children in some way or be freed up for some other special purpose which God has for them.

These comments are based on a longer article in Nucleus, which can be accessed here