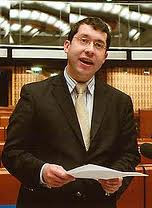 You may not read about this in any British newspaper but, as reported on LifeSite News, an attempt to erase the conscience rights of EU health care workers with respect to abortion was soundly defeated at the Parliamentary Assembly of the Council of Europe (PACE) this evening. The report reads as follows:

'In a vote of 56 to 51, the PACE rejected the proposal of Christine McCafferty, a British politician and abortion activist, to ‘regulate’ conscientious objectors to abortion across Europe.

The McCafferty Report, titled ‘Women’s access to lawful medical care: the problem of unregulated use of conscientious objection’ is the latest in a string of EU and PACE efforts to establish abortion as a universal human right.

As of tonight, Resolution 1763, re-titled ‘The right to conscientious objection in lawful medical care’ (see revised wording), instead of creating a requirement for doctors to participate in abortion, actually affirms their right to refuse.

The provisional edition published tonight reads, ‘No person, hospital or institution shall be coerced, held liable or discriminated against in any manner because of a refusal to perform, accommodate, assist or submit to an abortion, the performance of a human miscarriage, or euthanasia or any act which could cause the death of a human foetus or embryo, for any reason.’

Irish senator Ronan Mullen (pictured) and Luca Volonte of Italy, led the assembly in passing a series of amendments which totally reversed the thrust of the report. These changes forced McCafferty and other pro-abortion Assembly members to vote against their own proposal.

Had the measure been passed in its original form it would have placed pressure on European governments to pass legislation limiting the right to conscientious objection. This will now not happen. The vote is being called ‘a victory for common sense and for freedom’.

The move to defeat the proposal received support from unexpected quarters earlier today when Ann Furedi, chief executive of BPAS, Britain’s largest abortion ‘provider’, outlined in her Independent blog the reasons she did not support McCafferty. ‘We think it is better that doctors with a moral objection to abortion do have the opportunity to opt out of services’, she said.

The principle of conscientious objection to abortion is upheld in the 1948 Declaration of Geneva, which was originally adopted by the World Medical Association in response to the atrocities performed by some doctors under the Nazi regime.

This declaration includes the phrase ‘I will maintain the utmost respect for human life from the time of conception; even against threat I will not use my medical knowledge contrary to the laws of humanity’.

The British Abortion Act 1967 enshrines in law the right for doctors to abstain from ‘participation’ in abortion. Although this clearly provides an exemption to those who object to physically performing the procedure, it is still not clear what protection it offers to those who refuse more peripheral involvement.

The application of the law has recently been reviewed in Triple Helix in the light of the General Medical Council’s 2008 guidance, ‘Personal Beliefs and Medical Practice’.

This review mentions a letter I received from the GMC at the time confirming that doctors who objected to involvement in abortion are not breaching the GMC guidance if they refuse to:

1. Sign abortion authorisation forms
2. Clerk patients for abortion (ie carry out pre-op examination and assessment)
3. Refer patients seeking abortion to other doctors who will authorise it

Were a law restricting conscientious objection to abortion ever to be passed in Britain, Christians would of course be obliged to obey the higher law of conscience and take whatever consequences came their way. But for now conscience remains legally protected.
Posted by Peter Saunders at 15:30