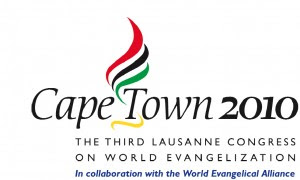 The Third Lausanne Congress on World Evangelization closed in 25 October in Cape Town with a ringing call to the Church. This Congress, perhaps the widest and most diverse gathering of Christians ever held in the history of the Church, drew 4,000 selected participants from 198 nations. Organizers extended its reach into over 650 GlobaLink sites in 91 countries and drew 100,000 unique visits to its web site from 185 countries during the week of the Congress.

‘Our vision and hope was firstly for a ringing affirmation of the uniqueness of Christ and the truth of the biblical gospel; and a clear statement on evangelism and the mission of the church - all rooted in Scripture,’ said Lindsay Brown, Lausanne Movement International Director, in his closing address. ‘The evangelical church has rightly put an emphasis on bringing the gospel of Jesus Christ to every people group, but we have perhaps been a little weaker in our attempts to apply biblical principles to every area of society, and to public policy: to the media, to business, to government. We need to engage deeply with all human endeavour - and with the ideas which shape it.’ The Congress included an Executive Leadership Forum and a Think Tank for leaders in Government, Business and Academia. ‘There is a groundswell of conviction,' said Mr Brown, ‘that greater concerted effort is needed to apply biblical truth in these arenas.’

The Cape Town Commitment, a declaration of belief and a call to action, will stand in the historic tradition of The Lausanne Covenant, which issued from the 1974 Congress, held in Lausanne, Switzerland. The Lausanne Covenant became widely-regarded as one of the most significant documents in recent church history. The Lausanne Movement, since its founding by the US evangelist Billy Graham, has worked to strengthen evangelical belief, and to reawaken the evangelical church’s responsibility in God’s world. The Cape Town Commitment is therefore in two parts. The first part, a Trinitarian statement, fashioned in the language of love, is the fruit of discussion by senior evangelical theologians drawn from all continents. This is available now on the Lausanne website, www.lausanne.org. The consequent call to action, shaped from discussion at the Congress around critical issues facing the Church over the next ten years, will be completed by December. It is expected to engage in principle with such issues from all parts of the world. Chris Wright, International Director of Langham Partnership International (John Stott Ministries / USA) is chief architect.

‘We would like The Cape Town Commitment to be seen as “a gift to the local church from representatives of the global church,”' said the Revd Doug Birdsall, Chairman of The Lausanne Movement. He then outlined the Board’s plans for the movement’s future: ‘First: to stay light on its feet, remaining agile in its ability to respond to new challenges and opportunities. Second, to be strong theologically, firmly rooted in Scripture and nourished by the best reflection on how we take the Word to the world. Third, to provide a reliable and credible contribution to Christian discussion and mission. Fourth, to keep a focus on identifying and developing younger leaders. And fifth, to be strategic in gathering the right people at the right times in the right places.

‘Lausanne gatherings will breathe oxygen into the fire that sparks more fires, and track progress made on the priorities established in Cape Town,’ he said. Mr Birdsall sketched out plans for a series of Davos-like gatherings, drawing thought leaders from the Church and from mission agencies, from government, business and academia. The first is planned for June 2012.

The Lausanne Movement is rooted globally under regional leadership around the world. The funding for the Congress had been raised from all regions, and from a ‘healthy combination’ of significant major gifts and many smaller gifts, often sacrificially-given.

The Congress extended to an estimated audience around the world of a further 100,000 people through its GlobaLink sites. It was also possible to participate virtually. Prior to the Congress, The Lausanne Movement launched a multi-lingual online Lausanne Global Conversation to begin the discussion process. This was complemented by a series of radio programmes in countries in the Global South. The Global Conversation, the first of its kind, has gained significant momentum and will continue. A round-the-clock team mined the data of all responses throughout the Congress. Malicious hacking of the Congress website brought the site down for the first two days.

‘The local church is God’s chosen locus of service and evangelism,’ said Doug Birdsall. The Congress closed with a celebration of Holy Communion, led by Archbishop Henry Luke Orombi of Uganda. For this, 100 communion sets had been borrowed, each from a local church. ‘These represent the remembering of Christ’s death across many nations,’ Mr Birdsall continued. ‘We are a global movement, committed to the local church.’

Cape Town 2010 was held in collaboration with The World Evangelical Alliance.
Posted by Peter Saunders at 09:27