Morphine kills the pain, not the patient but some people still just don’t get it 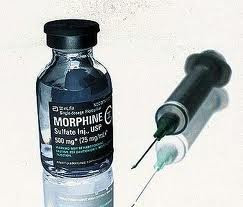 One of the most depressing aspects of campaigning against the legalisation of assisted suicide is dealing with misinformation propagated by the pro-euthanasia lobby and sadly at times even by members of the medical profession.

One of the ‘myths’ used to prop up the failing case for the legalisation of assisted suicide is the false belief that doctors all over Britain are killing people with analgesic drugs like morphine because they need to administer these drugs in lethal doses in order to kill pain effectively.

It is particularly wearying to hear doctors putting this argument as it reveals either that they are ignorant of the medical facts or, even worse, are seeking deliberately to mislead people in order to advance the pro-euthanasia cause: ‘We are killing people anyway with morphine so why not just be honest about it and legalise euthanasia’.

The latest example of this kind of misinformation appears in the Daily Mail this morning in an article by Nick Maes titled ‘I'll always be grateful to the GP who eased Mum's pain - even if it hastened her death’.

Maes relates the story of Dr William Lloyd Bassett, a Shropshire GP, who has been censured by the General Medical Council for giving an overdose of morphine to a man dying with lung cancer. Last week, a GMC hearing decided that Dr Bassett should continue to practise, but issued a warning of serious misconduct against his name.

He then goes on to describe how the same doctor ‘eased his own mother’s passing’ in a similar way.

The fact is that in good hands morphine kills the pain and not the patient. The real need is for better education of doctors in good palliative care – so that they know how to administer the drug effectively and safely – and better education of the public about the facts so that the pro-euthanasia lobby cannot continue to pull the wool to advance their agenda through misinformation and scaremongering.

For those interested in more detail about this issue I would highly recommend the article ‘Morphine kills the pain, not the patient’ published in Medical News Today, which I have reproduced below in full:

Professional and public anxieties about the effects of morphine continue to hinder adequate prescribing of this vital painkiller for genuine pain relief, claims a Comment in this week's edition of The Lancet.

Nigel Sykes, of St Christopher's Hospice, London, UK, says that the notorious Dr Harold Shipman's use of morphine as a murder weapon has further increased disquiet among UK medical professionals.

Dr Sykes claims that the best known fact about morphine among the public and physicians is that it can be addictive, when in fact less than one in 10 000 patients prescribed the drug as part of treatment becomes addicted.

He adds: "For physicians, the second best-known fact is that morphine can precipitate respiratory depression. As a consequence, if offered enough confidentiality, clinicians can be readily found who will confess to having shortened the life of their patients to achieve pain control."

The Comment goes on to say that it is hardly surprising in light of these points that the media view everyday medical practice for severe pain control as increasing the dosage of morphine until the patient dies.

Dr Sykes welcomes the recent study from the US National Hospice Outcomes Project, which studies morphine/opioid use and survival at the end of life - as it provides facts with which to explode the myths about morphine.

The study assessed 725 patients with end-stage cancer, lung disease or heart disease, and found that length of survival was not linked to either absolute or percentage change in dose of morphine or other opioids.

No combination of factors was capable of explaining a variation of more than 8% in survival time, which points to an overwhelming influence of the individual's disease severity.

Only patients who have no experience of opioid treatment are at significant risk of respiratory depression.

Dr Sykes says: "A patient with moderate-to-severe chronic pain, malignant in origin or not, who is given the incremental dose-titration practised in pain and palliative care centres is not at such risk. A physician who truly is killing his or her patient in the name of pain relief is not merciful, just incompetent."

He adds: "This problem matters because underprescribing of opioids remains a major barrier to effective pain control."

Dr Sykes also expresses his concerns for pain relief in developing countries, saying: "If ineffective pain management is still an issue in high-income countries, it is nearly universal in low-income countries where access to morphine is limited or absent, but where most people dying from cancer or AIDS reside."
Posted by Peter Saunders at 05:29