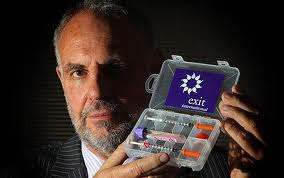 I previously commented on a You Tube video of the assisted suicide of a British couple in their 80s who died in a suicide pact at their home in Victoria Australia.

Don Flounders, 81, suffered from mesothelioma, which is an incurable form of lung cancer and his 88-year-old wife Iris, who was not suffering from a terminal illness, had decided she did not want to live without him.

The couple made no secret of their intention to die together and travelled to Mexico in 2008 to buy the veterinary drug Nembutal which they claimed they needed for a ‘controlled death’.

The couple killed themselves after receiving advice from Philip Nitschke, a dangerous self-publicist and extremist who is well known for promoting suicide amongst elderly people.

Nitschke is now claiming that he has found a legal loophole, to import nembutal into Australia where is planning to help six other people to kill themselves.

He claims to have discovered that it can be imported legally, if a doctor applies to the Therapeutic Goods Administration with an acceptable medical reason.
‘I’ll be quite open about what I’m doing. There is provision in the legislation for this import process,’ Nitschke said.

A new government notice claims it's illegal to import, unless reasonably prescribed, but Nitschke says ‘I’ll prescribe it as a sedative, what they do is up to them. Of course if they want to misuse it, I suppose they would peacefully end their lives - but of course they'll be advised about it and that's not the reason we're going down this path.’

Since Nitschke has advertised his intentions by speaking to the media, it seems likely that the government might indeed find that it is not being ‘reasonably prescribed’.

Nitschke has a track record of overplaying his hand.

Philip Nitschke is back in the British Isles but is not finding a warm reception for his ‘how to commit suicide’ seminars
Posted by Peter Saunders at 14:53