Why is the Home Secretary allowing Philip Nitschke back into Britain? 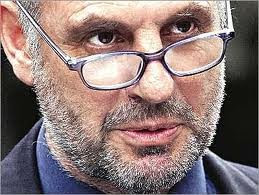 Mark and Helen Mullins are thought to have killed themselves at their rundown home after being reduced to despair as they struggled to live off just £57.50 a week. The couple had suffered a series of health and benefit setbacks and had had their 12-year-old daughter taken into care.

This tragic story is an extreme example of how some vulnerable families are feeling the economic pressure as the recession bites and living costs and unemployment rise.

Such people can be pushed by circumstances to take desperate measures and this sad case should heighten calls for more support and better protection for people living on the edge.

It is perhaps bitterly ironic therefore that Philip Nitschke (pictured) is entering Britain again this week to run a series of seminars instructing people how to commit suicide.

Nitshcke is an extremist and self-publicist who is on public record as supporting suicide for people including (in his own words) ‘the depressed, the elderly bereaved, the troubled teen’.

Between 12 and 21 November he will run a series of seminars in London, Eastbourne, Edinburgh and York in which he will give ‘practical information for end of life decision-making’.

I personally believe that these actions run contrary to the Suicide Act 1961 which prohibits the ‘encouraging or assisting’ of suicide.

I therefore wrote to Home Secretary Theresa May on 25 October asking her to exercise her powers to exclude Dr Nitschke on grounds of public policy and because his presence in the United Kingdom threatens a fundamental interest (namely the maintenance of the ‘rule of law’ and the maintenance of a law abiding community).

I urged her to take immediate action and, if no Exclusion Order was made, to provide me with full details surrounding the reason for the decision.

I have had no reply from the Home Secretary’s Office and to my knowledge no attempt has been made to detain Nitschke who is due to arrive this week.

The Home Secretary is, as we know, currently under pressure defending a decision to relax immigration controls. Nitschke’s arrival could well add to those difficulties.

With the growing elderly population, failure of the care system and worsening economic situation a growing number of frail, disabled, ill and depressed people in Britain, like the Mullins, will be feeling under even greater pressure to end their lives, either for fear that they will not cope, or so as to be less of a burden to relatives.

Let’s hope that no vulnerable person is ‘helped’ over the edge by attending one of his seminars or as a result of the inevitable media hype that will accompany his visit.
Posted by Peter Saunders at 01:51