BMA Ethics Debate – Great results on both abortion and euthanasia 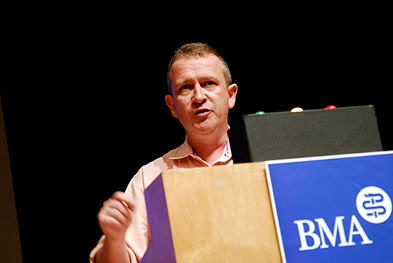 This morning the British Medical Association Annual Representative Meeting debated two motions on abortion and one on euthanasia.

Here is a record of the debates as they happened from the BMA blog.

Motion 328 called for the meeting to support the universal availability of non-directive counselling for women considering abortion.

It said that the counselling should be in accordance with NHS standards and independent of the abortion provider if women so wished.

Dr Mark Pickering, in proposing the motion, said the issue was about extending choice for women, not limiting it.

Professor Wendy Savage responded that she had been the press officer for a woman's choice organisation for 35 years. She said it was 'an absolute insult' to professionals to require so-called independent counselling. She said the pros and cons would be explained in any operation. She said most 'independent' counsellors were not actually independent.

But the meeting supported the provision of non-directive counselling for women considering abortion and also condemned the picketing and intimidation around abortion services.

This is a great result for women facing the crisis of unplanned pregnancy and should encourage parliament to make moves in the direction of independent counselling provision.

Motion 329 called for the meeting to back a call stating that abortion on the grounds of gender alone is unacceptable.

329 Motion by THE AGENDA COMMITTEE (MOTION TO BE PROPOSED BY THE GREENWICH, AND BROMLEY DIVISION):
That this Meeting believes that abortion on the grounds of gender alone is unacceptable and demands that :
i) such practice should cease forthwith;
ii) the law should be changed to make this practice illegal in the UK.

GP Kackie Applebee said the meeting had to be careful about passing any issue that sought to limit abortion. She called on the meeting not to jeopardise a woman's right to choose.

But GP Paddy Glackin maintained that the motion was not a slippery slope. He was cheered as he said the motion was saying that female infanticide was a gross violation of human rights.

However, after a passionate debate the motion was judged ‘not competent’ and was not passed.

Motion 332 called for the BMA to adopt a neutral position on ‘assisted dying’.

It had been brought forward by members of the pressure group ‘Healthcare Professionals for Assisted Dying’(HPAD) in an attempt to neutralise medical opposition to assisted suicide and euthanasia ahead of a new parliamentary bill calling for legalisation. HPAD is closely affiliated to Dignity in Dying, the former Voluntary Euthanasia Society and this motion was part of a carefully orchestrated campaign.

I have previously argued on this blog why I believe that going neutral on assisted suicide would be a very dangerous move indeed.

332 Motion by THE AGENDA COMMITTEE (MOTION TO BE PROPOSED BY THE SHROPSHIRE DIVISION):
That this Meeting:-
i) believes that assisted dying is a matter for society and not for the medical profession;
ii) believes that the BMA should adopt a neutral position on change in the law on assisted dying.

The proposer Professor Raymond Tallis argued that the current situation was 'morally repugnant' and said that the BMA should adopt a policy of studied neutrality on the issue of assisted dying.

Speaking against, Dai Samuel said an 'act of kindness' could lead to 14 years in prison, and added that he was there to care for patients and could not countenance something that he considered akin to murder.

John McGough encouraged doctors to accept that some colleagues do support assisted dying.

Speaking against, medical student Rebecca Briscow said the medical profession cannot be excluded from the decision and that a position of neutrality would be a breach of patient trust. She warns that physician-assisted dying is cheap - and dangerous - and that doctors must be the safeguard.

Farah Jameel responded that keeping a patient alive isn’t always the right answer, and that there was no right or wrong answer for assisted dying. She said a position of neutrality was key.

Also speaking in support, Isky Gordon related an anecdote about a colleague - who went on to be exonerated by the GMC and police - being investigated for the treatment of a terminally ill and mentally competent patient.

Professor Baroness Illora Finlay said that the public would not understand why the BMA won't express a view on the prescription of potentially lethal drugs. 'The safeguards proposed are no more than a checklist.' She believed neutrality would tell parliament that the BMA saw this as acceptable.

Speaking for the motion, Tom Henderson admitted it was 'uncomfortable' to shift away from opposition to assisted dying. He says there were legal and accepted options for some people - those who could fly to Switzerland for example - but others were 'condemned' to suffer. He said neutrality would allow a balanced view of a complex argument.

Ethics Chairman Tony Calland argued that we must approach this with a logical head and not an emotional heart. If the law changed the medical profession would be involved so it was important that we stayed engaged in the debate.

BMA Chairman Hamish Meldrum said a position of neutrality would exclude doctors from the debate and urged the meeting to reject the motion.

Both parts of the motion were lost.

In rejecting this move the BMA has sent out a strong message that doctors must play a leading role in this debate which could otherwise be far too easily swayed by celebrity endorsement and media outlets who have consistently acted as the cheerleaders for assisted suicide and euthanasia.

Majority medical opinion remains opposed to assisted dying and this vote is a victory for common sense. I hope that the BMA will now continue its valuable work in campaigning for high quality compassionate care for patients at the end of life.