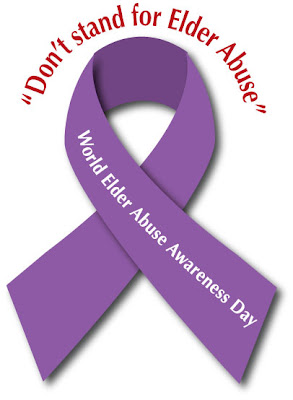 Older people are today being warned not to fall prey to bogus retail and investment schemes, after 78 rogue companies raking in more than £28 million from people were shut down in the last three years alone.

The companies scammed almost 2,000 investors between them and the oldest victim was aged 92, according to the Insolvency Service, which wound the firms up.

Issuing their warning on World Elder Abuse Awareness Day, campaigners said these scams often use high-pressure tactics or sell products at grossly inflated prices and conmen would cold call older people and refuse to hang up until they have closed a sale.

You probably won’t hear about it from any UK media outlet but the World Health Organisation produced a fact sheet.

Until the advent of initiatives to address child abuse and domestic violence in the last quarter of the 20th century, abuse of the elderly remained a private matter, well hidden from public view.

Today, it is increasingly being seen as an important problem and one that is likely to grow as many countries experience rapidly ageing populations. It is predicted that by the year 2025, the global population of those aged 60 years and older will more than double, from 542 million in 1995 to about 1.2 billion.

A number of situations appear to put the elderly at risk of violence. In some cases, strained family relationships may worsen as a result of stress and frustration as the older person becomes more dependent. In others, a caregiver’s dependence on an older person for accommodation or financial support may be a source of conflict.

Elder abuse takes place in many different settings – for example, the older person’s home, care homes, nursing homes and hospitals. It happens when an older person’s human rights and dignity are violated. It can come through financial scams (as above), physical attacks, sexual abuse, psychological abuse or neglect. The perpetrators are often in a position of trust and have control of the life of the older person.

Financial exploitation of a vulnerable adult can occur without the elder’s knowledge, by trickery, intimidation, or coercion, or when the elder is too confused to give informed consent.

It is often argued that legalising euthanasia or assisted suicide would be a recipe for elder abuse. Given the vulnerability of many older people, who already feel themselves to be a financial, emotional or care burden on others, this is a powerful reason for not changing the law and needs to be borne in mind over the next few weeks as the pro-euthanasia lobby piles on pressure aimed at changing the law.