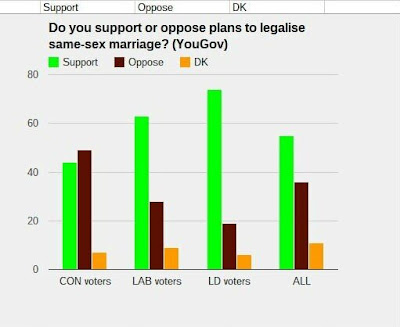 The Marriage (same Sex Couples) Bill passed its second reading in the House of Commons last night by a reported majority of 400-175.

The full debate can be read here.

The full list in Hansard of who voted for and against is here (scroll down) and you can find an alphabetical list here.

The Guardian blog gives a list of names by party here

The blog 'Liberal Conspiracy' (mouthpiece of the liberal elite) has published a 'list of shame' (ie. read 'roll of honour') of those who opposed the bill. C4M has a full list of all votes arranged alphabetically.

Only 127 Tory MPs supported it. Another 136 opposed it, and 40 MPs either voted both ways (actively abstaining) or did not vote. So in total he was supported by only 42% of his own MPs.

Liberal Democrats and Labour MPs largely supported it as expected.

The Bill now goes to committee stage then third reading in May and then to the Lords. It needs to get through the Lords to become law.

If it fails then David Cameron could still use the Parliament Act to force it into law despite Lords’ opposition.

YouGov polls on how party supporters feel on the issue are in the chart above.

Cameron is now in the position where he has the support of only a minority of his supporters and MPs. Things don’t look good for him.

The papers are almost unified this morning in their criticism of Cameron and the Daily Mail, Telegraph and Guardian are particularly strong on the self-inflicted nature of the wound.

Cameron was accused last night of needlessly splitting his party and prioritising an issue important to only a handful of voters. One poll suggests 70 per cent of voters now see the Tories as divided.

According to the Daily Mail the same YouGv poll cited above showed that just 7% of voters list gay marriage as one of the issues that most concern them – against 56% for the economy.

A Comres poll commissioned by the Coalition for Marriage asked voters whether ‘marriage should continue to be defined as a lifelong exclusive commitment between a man and a woman’. 53% were in favour and only 36% against.

Among the non-white voters Cameron is seeking to woo 65% favoured the traditional definition and only 25% didn’t.

So it appears that Cameron is in step with Lib Dem and Labour voters who will never vote Tory but out of favour with traditional Tory voters and minority groups. Not a shrewd move. Perhaps he would be better off in another party.

Colin Hart, of the Coalition for Marriage, which has opposed the legislation, said: ‘This result is a disaster for David Cameron. Despite a personal plea from the PM his MPs have overwhelmingly rejected gay marriage. Mr Cameron must think again.’

Last night was not the first time Mr Cameron has gone into the Commons division lobbies with a minority of his MPs over gay rights.

In 2007, on a free vote, he was among fewer than half of his party who supported gay adoption.

The previous biggest Tory split on a free vote was under Mr Duncan Smith in 2003, when the party split over reform of the House of Lords.

Some of my previous blogs on Cameron and the gay marriage issue are listed here:

1. David Cameron, by his comments about homosexuality, demonstrates that he does not understand what true tolerance actually is

3. David Cameron’s promotion of the gay rights agenda is based on a false presupposition

The full list of how party members voted is as follows: the numbers are slightly different from the reported numbers as some party members registered abstention votes by voting both ‘yes’ and ‘no’