Rosaria Butterfield is an ex-lesbian English academic and one-time professor of 'queer theory', now married to a pastor in the Reformed Presbyterian Church of North America.

She has written a fascinating autobiographical account entitled 'The Secret Thoughts of an Unlikely Convert: An English Professor’s Journey into Christian Faith' which is just starting to make waves in cyberspace.

Butterfield came out when she was a 28 year old graduate school student and later as researcher started reading the Bible when working on a project about the religious right. This led her into a friendship with a local pastor and the rest, as they say, is history (Testimony here).

Copies are available at Edinburgh Books, the Free Church Bookshop in Edinburgh, the Covenanter Bookshop in Northern Ireland and ‘Ten of those’. 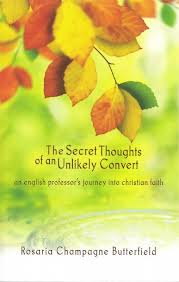 Carl Trueman’s review is one which I would particularly recommend.

There is also a 35-minute audio interview with Rosaria by Tim Challies and David Murray and an hour-long you tube interview with Marvin Olasky of World Magazine.

Trueman gives a number of reasons why every Christian should buy this book and read it:

First, it gives painful insights into how gays and lesbians perceive Christians.

Second, the book brings out beautifully how the gentle vulnerability of a humble pastor and his wife over many months were used by God to bring her into the kingdom.

Third, it shows how conversion often does not immediately solve problems. Butterfield's description of the impact of her conversion is 'comprehensive chaos.' It shattered her career, her network of friends, her reputation with those she loved.

Fourth, it is a paean to the delights of deeply rooted, confessional Reformed Christianity. Butterfield needed a stable, biblically based, historically tested and ecclesiastically responsible theology which only confessional churches provide.

Fifth, her treatment of sexual sin and gender politics is fascinating.

The autobiography is the launch pad for numerous sophisticated reflections on the nature of life, faith, sexuality, worship, education and other matters and, as one would expect from a lover of nineteenth century literature, is also beautifully written.

In listening to Butterfield’s you tube interview I was particularly struck by two things.

First was her account of how John 7:17 had been a key Scripture in helping her come to faith. In it Jesus says, ‘Anyone who chooses to do the will of God will find out whether my teaching comes from God or whether I speak on my own.’

As an English professor with an interest in the order of verbs this fascinated her and became her own experience. ‘I do’ preceded ‘I know’. Obedience was the key to knowing God.

Second I was struck by the personal cost of her decision: ‘A lot of people were hurt by my obedience. In our flesh we want to try to stop the hurt instead of realising that God will use the hurt in the redemption and calling out of people’.

She was helped through this hurt by Christians who had made similar costly sacrifices in other ways to come to a saving knowledge of Christ.

Her challenge? ‘Christian, what did you have to give up to be who you now are?’

I’m looking forward to reading ‘Secret Thoughts’ in full and I hope that the links above will at least serve similarly to whet your own appetite.
Posted by Peter Saunders at 14:43