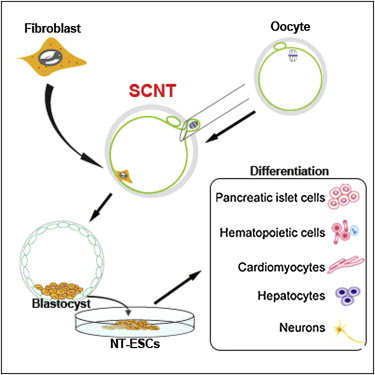 The newspapers are full today of the news that scientists in the US state of Oregon have produced embryonic stem cells (ESCs) using the same cloning technology (somatic cell nuclear transfer (SCNT)) that created Dolly the sheep.

The original paper was published in the scientific journal Cell (Reuters and Nature give helpful reviews).

Shoukhrat Mitalipov and his colleagues took skin cells and transplanted their nuclei into eggs from paid donors from which the nuclei had been removed. Some resulting embryos were grown to the blastocyst stage (about 150 cells) at which point embryonic stem cells were harvested and developed into stem cells lines from which a range of more specialised body cells were derived.

Some are claiming that this might be the first step in producing stem cells that can be used to treat conditions in which there is cell loss like Parkinson’s, diabetes and spinal cord damage.

The huge media coverage this story has generated is due to the obsession of the British media with embryonic stem cell technology, the fact that this is the first time embryonic stem cell lines have been derived from cloned human embryos and the emotion generated by conditions for which there is currently no cure.

Amidst the hype let me register six reasons for caution.

First, what many news outlets do not make clear is that these embryonic stem cells have been produced by the cannibalising of cloned human embryos, a process that results in their destruction. This is a huge ethical barrier to the technology for those who believe, as I do, that human life begins at conception.

Second, the paper discloses that ten women were paid to ‘donate’ more than 120 eggs in the course of the research. The primary means by which these eggs are procured is ovarian hyperstimulation which is associated with serious health risks in both the short and long term. Egg donors for the experiment received US$3,000–7,000 in compensation. This is expensive and risks creating an organ trade that preys on the poor, especially students. Jennifer Lahl’s excellent book ‘Eggsploitation’ spotlights the booming business of human eggs told through the tragic and revealing stories of real women who became involved in selling their eggs.

Third, the method used to create these embryos is identical to that used to create cloned adults. If someone were to implant one of these embryos in a woman it could theoretically be grown into a cloned baby. Such portakabin technology is extremely difficult to police and some like Dr David King, from the campaign group Human Genetics Alert, are saying for this reason that it should not be done at all.

Fourth, we know already that cloned mammalian embryos are not normal because they do not grow into normal adults. It took 277 attempts to create Dolly the sheep and she was abnormal and died early. This raises the strong possibility that stem cells derived from cloned embryos may not be normal either. This means that they are very unlikely ever to be used in treatments but only in research. It is adult stem cells derived from sources like umbilical cord blood and bone marrow that hold the real promise, are involved in the overwhelming majority of clinical trials and are already being widely used in treatment of a wide range of conditions.

Fifth, there is already alternative stem cell technology available for research. Induced pluripotent stem cells (iPS) (which can be made from reprogrammed adult cells without the need to create and destroy embryos) and for which Japanese researcher Shinya Yamanaka won a Nobel prize in 2012, have already led many researchers to abandon research using cloning methods. Although this research is still at an early stage iPS cells appear to have most of the properties of embryonic stem cells and their production does not involve the same ethical barriers.

Finally, this new research is at a very early stage and we need to beware of the huge media hype that will be generated around it by biotechnology companies and scientists who have financial and personal vested interests and a hotline to the media. We need to be wary that we are not being given an exaggerated account which is high on hype and plays down the real risks.
Posted by Peter Saunders at 14:58